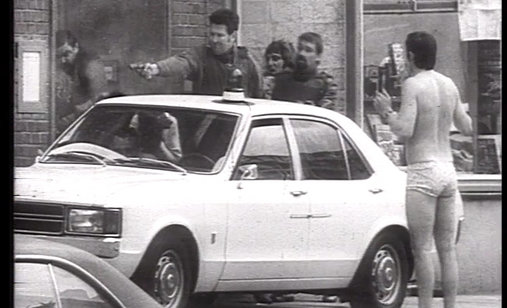 In the form of a documentary film essay, controversial police procedures in Germany in the autumn of 1974 are analysed, when suspects were killed in interventions even before they were arrested and tried, with both police officers and innocent people also being hurt. The film is based on documentary archive materials with records of real police actions (acquired from television) and on recorded eye-witness testimonies, with the comments of invited lawyers and political scientists. Public Execution uses examples of excessive force to question the humanity of contemporary society.

Želimir Žilnik was born in 1942 in Niš, and he is living and working in Novi Sad, Serbia. He has written and directed numerous fiction and documentary films which have garnered many awards at national and international film festivals. He is one of the pioneers of the docu-drama genre. From the very beginning his films have focussed on contemporary issues, featuring social, political and economic assessments of everyday life: Newsreel on Village Youth, in Winter (1967), Little Pioneers (1968), The Unemployed (1968), June Turmoil (1969), Black Film (1971), Uprising in Jazak (1973). Žilnik’s fiction debut Early Works (1969) won the Golden Bear at Berlinale and four awards at Pula Film Festival. In 1995 his film Marble Ass won the prestigious Teddy Award at Berlinale. ZagrebDox has screened Žilnik’s films Logbook Serbistan (2015), Pirika on Film (2013) and Europe Next Door (2005), which won the Big Stamp. He was an International Jury member at ZagrebDox 2019. Žilnik’s latest films are The Most Beautiful Country in the World (2018) and Among the People: Life & Acting (2018).