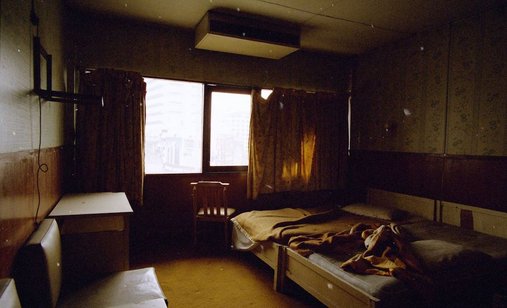 In the Buddhist novel Der Pilger Kamanita by Danish writer Karl Gjellerup from 1906, the protagonists are reborn stars, narrating their stories to each other for centuries, all until the end of their existence. The former Morakot hotel, now derelict and devastated, was opened in the 1980s in the heart of Bangkok, at the time of Thailand’s accelerated economic industrialisation. However, the financial crisis that hit Eastern Asia marked the end of that period. Just like Kamanita, Morakot is a star imbued with memories. Next to his three favourite actors who reminisce on their dreams and life in their native city, Apichatpong Weerasethakul fills the hotel with new memories.

Apichatpong Weerasethakul is a writer and director from Thailand. He began making film and video shorts in 1994, and completed his first feature in 2000. He has also mounted exhibitions and installations in many countries since 1998. Often non-linear, with a strong sense of dislocation, his works deal with memory, subtly addressed personal politics and social issues. His art projects and feature films have won him widespread recognition and numerous festival prizes, including two prizes (Special Jury Prize, and Palme d’Or) from the Cannes Film Festival. In 2012, he was invited to participate in dOCUMENTA (13), one of the most well-known art exhibitions in Kassel, Germany. In 2016, a retrospective of his films was presented at Tate Modern, London. In 2019, Apichatpong was awarded the Artes Mundi prize, the UK's largest prize for international contemporary art. His latest film from 2021, Memoria, sets in Colombia and features actress Tilda Swinton.