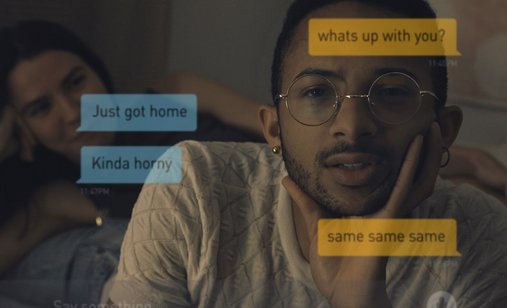 Wanting to better understand online dating, director Pacho Velez sought out New Yorkers during COVID-summer who were making genuine efforts to find a partner on the internet. Searchers draws on over 75 encounters with people of different races, genders, ages, and sexual preferences, as they navigate dating apps, searching for their special someone. The film unfolds online; the characters, including the director himself, wade through apps and decode dating profiles while narrating their decision-making process. Alternately humorous and touching, these portraits capture the variety of sexual and romantic experiences available online, as well as the diverse community of people seeking them out.

Pacho Velez’s recent feature, The American Sector (2020, co-directed with Courtney Stephens), premiered at the Berlin Film Festival. His previous features, Manakamana (2013, co-directed with Stephanie Spray) and The Reagan Show (2017, co-directed with Sierra Pettengill), have played around the world, including at the New York Film Festival, the Toronto International Film Festival, and on CNN. In 2010, Pacho received his MFA from CalArts. In 2015, he was awarded a Princeton Arts Fellowship. At present, he is Assistant Professor of Screen Studies at The New School in New York City.