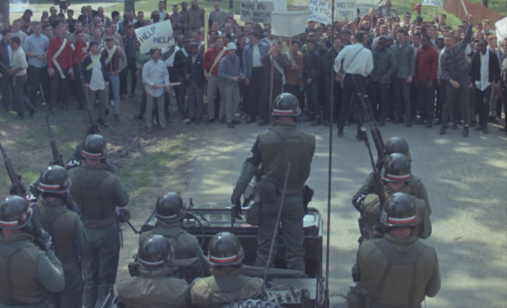 Riotsville, USA takes us to a turning point in American history where the protest movements of the late 1960s came into conflict with increasingly militarized police departments. Focusing on unearthed military training footage of Army-built model towns called “Riotsvilles” where military and police were trained to respond to civil disorder, the film reconstructs the formation of a national consciousness obsessed with maintaining law and order by any means necessary. Consisting entirely of archival footage shot by the US military or broadcast on television, Riotsville delivers insight from a time similar to our own amid today’s shifting reckonings on power and state sanctioned violence and systemic racism.

Sierra Pettengill’s work focuses on the warped narratives of the American past. Recently, she directed the archival short The Rifleman, which premiered at the 2021 Sundance Film Festival. Her 2017 feature-length film, the all-archival documentary The Reagan Show, premiered at the Locarno Film Festival before airing on CNN. She directed the Big Dan’s Tavern episode of the Netflix series Trial By Media about the first televised rape trial in the U.S. Her 2018 all-archival short film, Graven Image, aired on POV and is held at the Legacy Museum in Montgomery, Alabama. In 2013 she produced the Academy Award-nominated film Cutie & the Boxer, which also won an Emmy Award for Best Documentary, and co-directed (with Jamila Wignot) Town Hall about the emergent Tea Party movement, for PBS. She has also worked as an archival researcher for many artists including Jim Jarmusch and Adam Pendleton. She was a Sundance Institute Art of Nonfiction Fellow, a fellow at the Yaddo and MacDowell colonies, and is a board member of Screen Slate.

Produced by:
Field of Vision