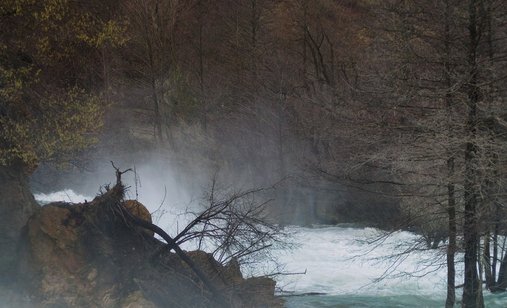 Sitting in the back of a moving car, different passengers go on the road on the edge of a vast forest. They carry tales about hornet’s nests, petitions against nuclear waste, loneliness, carnival treats, folklore traditions, cemetery visits and roads leading home. Passengers and their stories are arranged symbolically to follow a life span – from childhood to old age and final absence. As our passengers ‘grow older’, the stories become more serious and lively chit-chats are replaced with worrying about social issues, preserving tradition and reflections on life before finally coming full circle with return to childhood memories.

Working in diverse fields from film to video art, Tea Lukač has directed short fiction films, documentaries, music videos and showcased at art exhibitions. Tea’s work thus far has traveled to film festivals worldwide, including Trieste, Ji.hlava and DOK.fest München. She acquired Master’s degree with the documentary The Most Important Boy in the World, which premiered at IFF Beldocs in 2016 and won the awards for Best Music Documentary at Doc’n’Rhytam IFF and Best Documentary at Balkan FF in Sweden 2017. Tea is a member of DokSerbia and an alumna of Ex Oriente. Her debut film, conceptual documentary Roots, premiered at the East of the West selection of Karlovy Vary IFF.