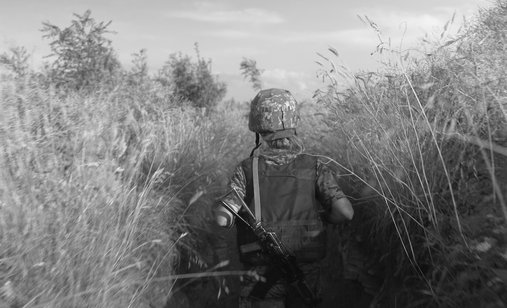 In Donbas, Ukraine, while precarious truces and ceasefires are negotiated far away by diplomats, Ukrainian soldiers fight against separatists supported by Russia. At an age when some are experiencing the best years of their lives, in the frontline men and women are fighting, condemned to dig and dig up again the trenches, while bombs keep on falling on them. French war journalist and first-time director Loup Bureau takes us on an immersive and stunning cinematic journey revealing the naked truth and roughness of survival, in what is called to be the last conflict on European soil.

Loup Bureau was born in 1990. French director and journalist, Bureau spent several years working as international reporter, covering the Arab Spring in Egypt, the Syrian war and the Russian-Ukrainian conflict in the Donbas region. In July 2017, in a context of increasing attacks against press freedom in Turkey, he got arrested near the border with Iraq while filming a report. Accused of "terrorism", he risked a 25-year sentence in prison. On September 17, 2017 Turkish authorities, under diplomatic pressure, agreed to free him. Since then, Loup Bureau has been living between France and Ukraine. Trenches is his first feature film.