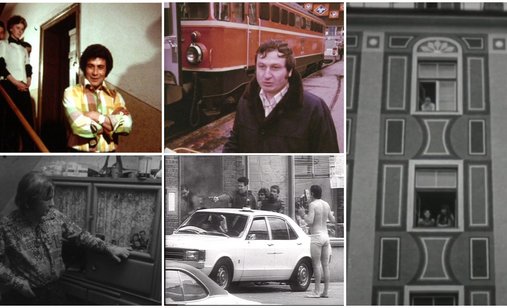 This year’s ZagrebDox retrospective is dedicated to director Želimir Žilnik, who, with his almost six decades of work, is undoubtedly one of the key figures in politically and socially engaged cinema.

A retrospective called Fragments from Migrant Worker Opus includes a part of his filmography made in Germany in the mid-1970s, where he went after his films in Yugoslavia were assessed as ideologically unsuitable.

Žilnik continues to turn the camera towards marginalised and disenfranchised subjects. Guest workers whose life in a foreign country is subject to a number of restrictions, precarious living conditions deprived of privilege and repressive methods of government are the topics of short independently produced films, important examples of Žilnik’s “cinema about Europe’s internal exiles”, as Pavle Levi calls it.

Public Execution (1974, 9’) in the form of a documentary film essay analyses the controversial police actions in Germany in the autumn of 1974 when, during several interventions, suspected criminals were killed before they were arrested and tried. The film is based on documentary archival material with records of actual police actions and recorded eyewitness testimonies, with comments from invited lawyers and political scientists.

Inventory (1975, 9’) represents the tenants of an old apartment building in the centre of Munich. Most of them are foreigners living in Germany as ‘guest workers’ (Yugoslavs, Italians, Turks, Greeks, etc.), together with their families. Each of them, including the youngest ones, presents themselves individually in German or in their own mother tongue, briefly revealing their worries and fears, but also their hopes and plans for the future.

House Orders (1975, 12’), similarly, delves into collective housing for foreign workers in Germany. Such apartments for foreign workers had special codes of conduct, defined by house rules, the observance of which was monitored by supers. In interviews with residents and ‘wardens’, absurd situations and conflicts caused by restrictions were noted.

Under State Protection (1975, 11’) it was filmed in an old, dilapidated building where several dozen guest worker families live. In order to avoid the obligation to maintain the building according to the legally prescribed standards, the owner – a local influential politician – managed to place the building as a cultural monument under state protection. However, he charged the rents as if it were a normal object of standard comfort.

Farewell (1975, 9’) at the main Munich railway station accompanies a worker from Serbia who, after several years spent working in factories in several German cities, returns to Belgrade. The protagonist gathers his impressions of the cities and the country in which he worked, tells the story of new knowledge and habits he acquired and, in that recapitulation, says goodbye to Germany with the words “Auf Wiedersehen, Deutschland!”