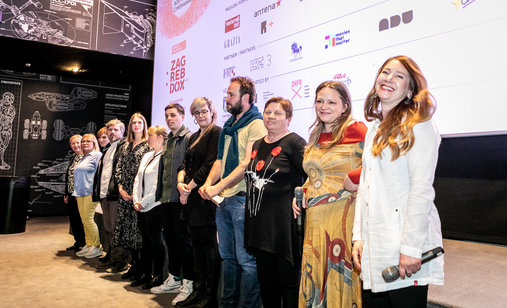 After counting the votes, on the last day of the 18th ZagrebDox we found out that the film the audience liked the most is Bigger than Trauma, which premiered on Tuesday, 5 April. The first screenings of the film already caused powerful emotions, so it is not surprising that the film won the average vote of 4.94. The award will be presented to the authors tonight at 8 pm, and the film can be seen in The Best of Fest screening at noon in Theatre 1 and at 8 pm in Theatre 3.

The jury’s vote this year coincided with the audience vote. The highest average rate of 4.87 went to A House Made of Splinters by Simon Lereng Wilmont which won the Movies That Matter Award, Summer Nights by Ohad Milstein– the opening film – won 4.76, Dida by Nikola Ilić and Corina Schwingruber Ilić, the regional competition Big Stamp winner, was rated with 4.66, Imad’s Childhood (Zahavi Sanjavi) which won the special mention of the Movies That Matter jury was rated with 4.66, The Balcony Movie by Pawel Lozinski, the winner of the international competition jury special mention with 4.57, The Bubble (Valerie Blankenbyl), the winner of the FIPRESCI Award, with 4.54, Sabaya by Hogir Hirori (Big Stamp for best film in international competition) with 4.52, 107 Mothers by Peter Kerekes with 4.49, and The Building by Goran Dević with 4.48.

The 18th ZagrebDox Audience Award is sponsored by Zagrebačka banka.

Photo: the premiere of Bigger than Trauma