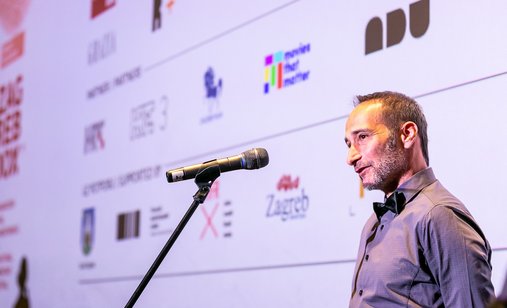 After last night’s official opening, today at 6 pm we are re-screening the film Summer Nights, followed by a Q&A with director Ohad Milstein. The director of this extremely manifold film study of childlike innocence and vitality and transience, Ohad Milstein, directs films that experiment with form and are characterised by distinct visuality. He studied film at Tel Aviv University and photography and art at the Bezalel Academy of Art and Design. He is an active video artist who exhibits at national and international art exhibitions.

At 7 pm, the film The Bubble will follow, followed by another Q&A, this time with director Valerie Blankenbyl, an Austrian documentary filmmaker. She has a master’s degree in film from Switzerland, has lived in several different countries and has directed three feature-length documentaries.

With us at ZagrebDox is the director of the film Divas, scheduled for 8 pm today, Máté Kőrösi. This Hungarian director graduated from the ELTE Film School and later completed his documentary film studies at the University of Theatre and Film Arts. While still at ELTE, he dedicated himself to fiction films and made Szuper (2015), which was screened at numerous Hungarian short film festivals. Divas is his feature-length documentary debut.

The last Q&A of the day will be after the film You Are Ceaușescu To Me, which is scheduled for 9 pm. Sebastian Mihăilescu, who holds a master’s degree in film directing from the National Academy of Theatre and Film in Bucharest, is also a guest at ZagrebDox. He has directed three short feature films and the latest, the master’s film Old Luxurious Flat Located in an Ultra-Central, Desirable Neighborhood, which premiered in the Pardi di Domani competition at the Locarno International Film Festival 2016. It was screened at MoMA, the Lincoln Film Center in New York and at numerous festivals. As a student Mihăilescu was an assistant to director Radu Jude on the film Aferim! (2015, Silver Bear at the Berlinale) and Radu Munteanu at One Floor Below (2015, premiere in Un Certain Regard in Cannes). During his studies, he also took part in the Sarajevo Talents programme for young directors and began directing commercials.

Photo: Ohad Milstein and Nenad Puhovski, the opening of the 18th ZagrebDox