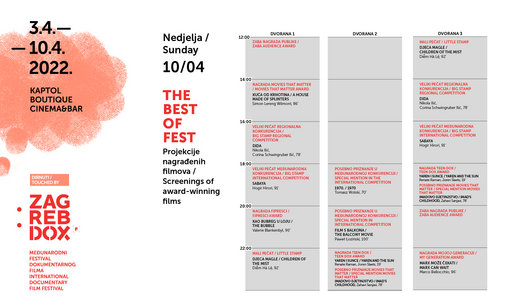 Screenings start at noon, with the Children of the Mist by Diễm Hà Lệ, which won the Little Stamp for the best film by a young author under 35 (Theatre 3), and a screening of the film that will win the Zaba Audience Award (Theatre 1), which be known on Sunday morning.

At 2 pm, the audience has a chance to see A House Made of Splinters (Simon Lereng Wilmont), which won the Movies That Matter Award for the best human rights film (Theatre 1) and Dida by Nikola Ilić and Corina Schwingruber Ilić, the winner of the Big Stamp for best film in regional competition (Theatre 3).

For those who miss it in this slot, Dida is also scheduled for 4pm in Theatre 1, while in Theatre 3 at 4pm we’re watching the film that won the Big Stamp for best film in international competition, Sabaya, directed by Hogir Hirori.

Sabaya is also scheduled for 6 pm in Theatre 1. Theatre 2 at that time screens a film that was given a special mention by the international competition jury, 1970 by Tomasz Wolski, while at 18 in Theatre 3 we watch Yaren and the Sun (Renate Raman and Joren Slaets), winner of the Teen Dox Award for Best Film on youth issues, and Imad’s Childhood (Zahavi Sanjavi), the winner of the Movies That Matter Special Jury Award for Best Human Rights Film (Theatre 3).

At 8 pm we watch the winner of the FIPRESCI Award for the best film in regional competition, The Bubble (d. Valerie Blankenbyl, Theatre 1), The Balcony Movie by Paweł Łoziński, the winner of the Jury Special Mention (Theatre 2) and the film which will win the Zaba Audience Award (Theatre 3).

ZagrebDox ends with three screenings at 10 pm: Children of the Mist is on in Theatre 1, Yaren and the Sun and Imad’s Childhood in Theatre 2, and Marx Can Wait by Marco Bellocchio, the winner of the My Generation Award, in Theatre 3.

Tickets for Sunday screenings can be purchased at the Kaptol Boutique Cinema box office (Nova Ves 17) at an individual price of 26 kuna or at a price of 80 kuna for the package of all six screenings in one theatre.