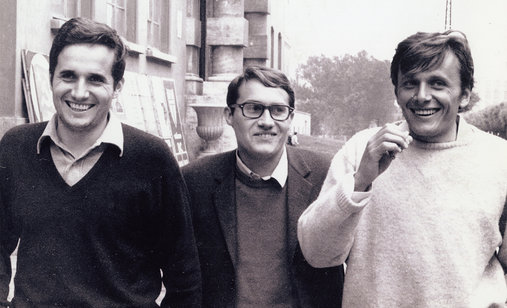 Director Jay Rosenblatt should hardly be introduced to the festival audience – the world-renowned director has more than 30 films and over a hundred awards, and most of his work has been presented in the past two decades at ZagrebDox. In 2012, Rosenblatt was also a festival guest when a retrospective was dedicated to him. In the latest film, When We Were Bullies, which competes for an Oscar in the short documentary film category, Rosenblatt goes back 50 years, among former school friends, to re-examine their memories of an incident of peer violence that marked their elementary school days. Through the process of working on the film, the director begins to reveal and understand his own involvement, as well as the fact that the bully sometimes hides in all of us. After its premiere at Sundance Film Festival, the film toured some of the most important festivals around the world, while at Florida Film Festival it won the Best Documentary Award.

Marco Bellocchio is a veteran of Italian cinema, the author of an impressive number of feature films, documentaries and short films in a wide range of genres and themes. His work is distinctive and personal, reflecting uncompromising attitudes and artistic ambitions with which he often provokes Italian cinema. During his 50-year career, Bellocchio has questioned ruling ideologies, opposed the Church and the radical left, and challenged the notions of morality and family, establishing himself as one of Italy’s most important filmmakers. This year at ZagrebDox Bellocchio will be awarded the My Generation Award, which the director and founder of the festival Nenad Puhovski has been awarding for years to authors whose works have been acknowledged and crucial in documentary cinema. The reason for the award is Bellocchio’s latest film Marx Can Wait, in which he also confronts the past, but here with a much more traumatic experience – the suicide of his twin brother, which happened more than 50 years ago. Bringing the family together, Bellocchio combines intimate conversations with archival material, family films and his own work, all with the aim of dealing with the trauma that has haunted him for over half a century. Starting as a family conversation, the film turns into an exploration of sadness, guilt and responsibility, compassion, empathy and love. The film was screened at Cannes Film Festival in the Golden Eye category.

Jon Bang Carlsen is one of the most innovative and original Danish filmmakers, idiosyncratic for creating his own genre at the crossroads between documentary and fiction. Carlsen was awarded the My Generation Award at ZagrebDox in 2017. In his latest work, The Banality of Grief, he also faces a traumatic experience, but one he experienced directly – the loss of his life partner. Carlsen visits different places, captures a wide range of characters, shares his thoughts and memories, thus communicating with the viewer, but also with the lost woman. It is a film love letter to a beloved woman and the places where they shared life for 35 years; it premiered at the CPH: DOX festival, the international documentary film festival in Copenhagen.

The latest documentary by Chinese director Zhao Liang (author of the film Petition, awarded the Big Stamp in the ZagrebDox international competition in 2010), I’m Sorry, conceived as an essay-song, looks at the problem of nuclear energy. Following various protagonists from Fukushima, Chernobyl and Onkal, this achievement provides answers to how nuclear energy has shaped human destiny in the past, but also how it affects the present and the future. The film was screened at Cannes Film Festival and was named best documentary at Busan Film Festival and China International Documentary Film Festival.