Read all about the programme! 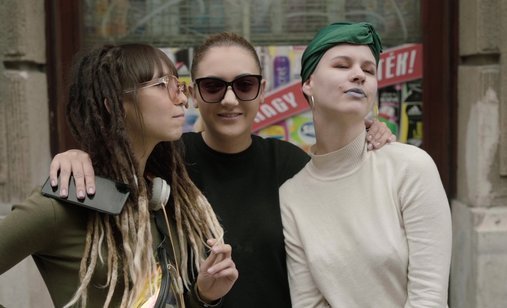 The first day of the festival starts with free screenings at 3pm: one block features screenings of short films from Teen Dox: Love Me by Romane Garant Chartrand, Yaren and the Sun by Renate Raman and Joren Slaets and Water, Wind, Dust, Bread by Mahdi Zamanpour Kiasari in Theatre 2, while films from the international competition Children of the Mist by Diễm Hà Lệ and Julia and I by Nina Hobert are shown in Theatres 4 and 5.

The omnibus The Year of Eternal Storm, a love letter to cinema directed by a number of prominent authors, is scheduled for 4pm in Theatre 1, and at the same time Theatre 3 is screening of Cusp by Parker Hill and Isabel Bethencourt.

The first screening of the Road Dox section is scheduled for 5 pm, when the audience will have a chance to watch the poetic film Holgut by Liesbeth De Ceulaer, which addresses the climate crisis in an unusual way. At the same time, in Theatre 4, the film The Cars We Drove Into Capitalism by Boris Missirkov and Georgi Bogdanov will be screened, an entertaining film whose protagonists share a love for socialist cars, and in Theatre 5 Young and Afraid, an autobiographical documentary by Norwegian director duo Petter Aaberg and Sverre Kvamme, is on screen.

At 6 pm, Theatre 1 will screen a film from The State of Affairs section, Saeed Taji Farouky’s A Thousand Fires, while in Theatre 3, in addition to the short film Love, Dad by Diana Cam Van Nguyen, the film that opened the festival, Summer Nights, will be screened, followed by a Q&A with the author Ohad Milstein.

At 7 pm in Theatre 2, the director Valerie Blankenbyl will present the film The Bubble from regional competition, while in Theatres 4 and 5, the winner of the DOK Leipzig Festival, the Chinese film Father by Deng Wei, and the touching film about forbidden love – A Night of Knowing Nothing directed by Payal Kapadia, are scheduled.

At 8 pm in Theatre 1, the film Divas will be presented by Máté Kőrösi, while Riotsville, USA by Sierra Pettengill will be screened at the same time in Theatre 2.

The first day of the festival ends with screenings at 10 pm, with films Aya by Simon Coulibaly Gillard in Theatre 1 and When We Were Bullies by Jay Rosenblatt and 1970 by Tomasz Wolski in Theatre 3.