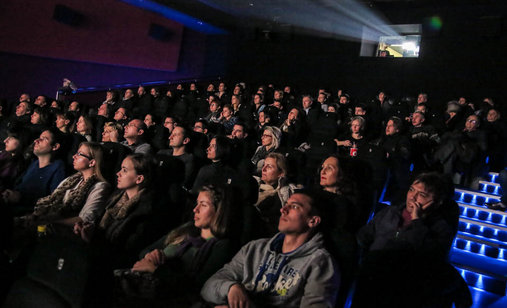 After two challenging years, a temporary move to new dates and new (old) spaces, ZagrebDox is coming of age in springtime, returning to the Kaptol Boutique Cinema! Convinced that we are seeing signs of stability, as well as offering visitors the best conditions for watching the best recent documentary stories from all over the world, the ZagrebDox programme resonates with events around us, reflecting everything that is happening in the world today.

The 18th, adulthood, edition of ZagrebDox will be held from April 3 to 10 and offer the cinema audience to step into many life stories, situations, relationships and parts of the worldthat are today, more than ever, less accessible and defined by many restrictions. With about eighty titles, the audience will have a chance, through different creative concepts, approaches and poetics, to question the meaning of divisions, borders, wars, individual responsibilities, crises as a consequence of the functioning of the system, but also the importance of contact, relationships, communication, coexistence, independence, individuality and coping.

Around thirty filmswill compete in the international and regional competition of the ZagrebDox competition programme, while other films are allocated in official programmes such as Biography Dox, Masters of Dox, Teen Dox and the always popular sections Controversial Dox and State of Affairs.

The competition features many films honoured at festivals around the world: A Night of Knowing Nothing is the debut film by director Payal Kapadia that speaks through letters about the forbidden love of two Indian students separated by different castes. This hybrid of documentary and fiction through an intimate story sheds light on broader socio-political issues in today’s India, and at Cannes Film Festival won the Golden Eye Award for Best Documentary.

Questioning the notion of the ‘Chinese dream’ today and exploring capitalist hyperproduction and the paradox of progress, we are taken to China by the film Ascension by American filmmaker Jessica Kingdon, an Oscar-nominated documentary and the best documentary at Tribeca Film Festival. At this festival, the director was also awarded for the best documentary debut filmmaker.

The shocking multi-award-winning Swedish documentary Sabaya by director Hogir Hirori takes us to the most dangerous Islamic State (ISIS) camp in the Middle East, following a group of young men who risk their own lives to save girls trapped as sex slaves. This impressive film won about 15 awards, including the best documentary at Sundance Film Festival, as well as at international film festivals in Moscow, Stockholm, Hong Kong and at DocAviv.

At ZagrebDox, we will also screen the current winner of the Amsterdam International Documentary Film Festival (IDFA) in the Envision competition – Lebanese director Karim Kassem’s film Octopus, a metaphysical film study of the consequences of the explosion in the port of Beirut. The new film by the renowned Polish author Paweł Łoziński, well-known to the festival, The Balcony Movie is also part of an international competition. For two years, Łoziński used a camera to record neighbours, passers-by and suspicious visitors from his own balcony. The film won the Grand Prix in the Critics Week Award category at Locarno International Film Festival.

The debut film Father by Chinese author Wei Deng, a portrait of two generations in the director’s family, depicts tradition, change, violence and alienation in Chinese society. At DOK Lepizig festival, it won the Golden Dove.

In addition to the film programme, ZagrebDox includes the ZagrebDox PRO platform dedicated to the education of film professionals, as well as a number of additional events in the form of special screenings, discussions, presentations, about which we will publish more information soon.

ZagrebDox takes place with the support of the City of Zagreb and the Croatian Audiovisual Centre.