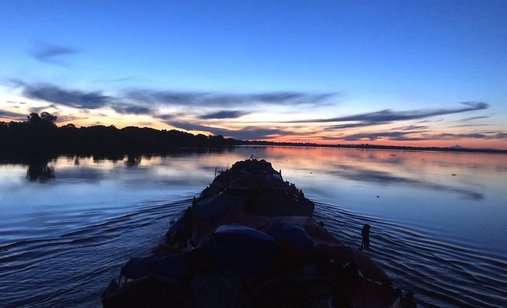 The winning film titles were announced on Saturday, June 19, starting at 7.30 pm at the awards ceremony of this year’s edition of the ZagrebDox International Documentary Film Festival. From June 13, the audience had the opportunity to watch around eigthy documentaries at the Zagreb Student Centre and at the Tuškanac Open Air Cinema, and numerous filmmakers visited the festival and presented their achievements live to the audience.

The international competition section was judged by a jury consisting of director Rajko Grlić, chair of this year’s jury, editor Vesna Biljan Pušić and Russian director Ilya Povolotsky, last year’s ZagrebDox winner. The official festival award, the Big Stamp, went to the film Downstream to Kinshasa by Dieudo Hamadi for, in the jury’s words, “a strongly told and emotionally charged story about innocent victims of war on a futile search for a piece of justice.” Special mentions in this category went to Alejandro Telémaco Tarraf’s Piedra Sola and Mikhail Gorobchuk’s Shadows of Your Childhood.

In regional competition, the Big Stamp went to the short film My Uncle Tudor by Olga Lucovnicova, and the decision was made by a regional jury consisting of: Croatian director Đuro Gavran, Romanian director and investigative journalist Radu Ciorniciuc and film historian and curator Jasmin Basic. “Demonstrating how a short form with the help of strong film elements can talk about some of the biggest problems of our time, the talented and brave young filmmaker from Moldova sent a strong message to the world: sexual abuse of children is one of the biggest social problems of our time we have to face and which we have to solve,” reads the jury’s explanation. The same jury also awarded a special mention to Punta Sacra by Francesca Mazzoleni.

The young jury, consisting of film producer and curator Lejla Dedić, film industry promoter Mirjam Wiekenkamp and psychologist and scholar Boris Jokić, decided on the Small Stamp award, which is given to the best film by a young author. This year’s Small Stamp went to Roman Hodel’s The Game, “for its high cinematic and artistic value, for its approach to a popular topic and its deep immersion in an occupation that is often overlooked. This film took only 17 minutes to score. This dynamic presentation combines humour and subtle social commentary on the aspect of society that many consider the most important,” according to the jury. Francesca Mazzoleni’s film Punta Sacra received a special mention in this category as well, and the second special mention was given by the young jury to the film Wake up on Mars by Dea Gjinovci.

The International Federation of Film Critics Award – FIPRESCI, which was decided by a jury consisting of film critic Ruggero Calich, critic and associate professor at the Danish School of Media and Journalism in Aarhus, Steffen Moestrup and Canadian film critic and writer Justine Smith, went to the film The Wire by Tiha Gudac. The jury’s explanation reads: “With an intimate view of human lives along a beautiful but controversial border, this film deals with complex and challenging issues of the global refugee crisis through a local perspective.”

The Movies That Matter Award went to a film that best promotes human rights, and this year the decision was made by a jury consisting of producer and festival programmer Oliver Sertić, Iranian filmmaker Mehrdad Oskouei and Zagreb Academy of Dramatic Arts dean Franka Perković Gamulin. This award was given to Iryna Tsilik’s film The Earth is Blue as an Orange, a poetic and at the same time multi-layered, impressive documentary, according to the jury. “From a simple everyday life in the heart of a devastating war, the filmmaker and her family bring light and hope with the help of the magical power of cinema,” says the jury. Special mentions in this category went to the films Radiograph of a Family by Firouzeh Khosrovani and Holy Bread by Rahim Zabihi.

The Teen Dox Award for the best achievement from the category of the same name, which best speaks about the problems of young people, was judged by the students of the American International School in Zagreb. The award went to the film Desert Dogs directed by Samuel Morris. “We chose this film because it shows the flow of the connection between photography and the message. A beautiful cinematography of the Moroccan landscape allows the protagonists to inspire us with their stories of passions despite the societal expectations,” concludes the jury.

Finally, the Israeli filmmaker Avi Mograbi is this year’s winner of the My Generation Award, which is awarded by the director of ZagrebDox, Nenad Puhovski, for the exceptional contribution to documentary filmmaking to the author of his generation. “Although the history of documentary film is full of author-activists, few have been able to combine activism with significant artistic achievements and, more importantly, aesthetic research. Avi Mograbi is one of those, rare authors”, reads Nenad Puhovski’s explanation.

Which film will win the audience award will be known on Sunday morning, and throughout Sunday the winning film titles of this year’s ZagrebDox will be screened as part of The Best of Fest event at a series of screenings at the SC Cinema from noon until 10 pm. Individual tickets at the price of 20 kuna and a package of tickets for The Best of Fest at the price of 70 kuna can be purchased at www.mojekarte.hr or at the box office in the lobby of the SC cinema of the Student Centre in Zagreb.