Awards of the 18th ZagrebDox 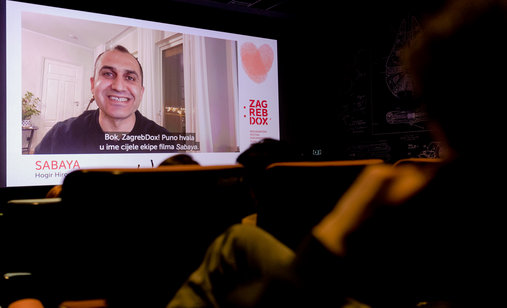 The international jury was chaired by Croatian director Katarina Zrinka Matijević, who made the decision together with other members of the jury, directors Mikhail Gorobchuk and Dalibor Matanić. The Big Stamp in this section went to Sabaya by Hogir Hirori, which “captivated the jury with thriller-suspenseful dramaturgy, insanely brave camera, fascinatingly wise editing and unobtrusive and extremely thoughtful direction.” This suspenseful piece about a group of brave men who risk their lives by rescuing Yazidi women from the infamous ISIS camp arrived at ZagrebDox already honoured with a number of accolades, including an award for directing at Sundance. Special Mentions in the international competition went to the film Balcony Movie by Paweł Łoziński and in 1970 by Tomasz Wolski.

In regional competition the Big Stamp went to the film Dida, directed by the duo Nikola Ilić and Corina Schwingruber Ilić, and the decision was made by a regional jury whose members were last year’s ZagrebDox winner Olga Lucovnicova, director of Al Jazeera Network in Sarajevo Edhem Fočo and Sari Volanen, editor at the Finnish television channel Yle. “A touching and melancholic, but at the same time optimistic film about his own family, which he narrates in a positive tone with a dose of humour” – these are the words of the jury judged the film Dida. A Special Mention in regional competition went to the Croatian documentary Bigger than Trauma by Vedrana Pribačić and Mirta Puhlovski, “a film that reveals voices left in the shadow of the Croatian War of Independence, conveying a wonderful collective portrait of women survivors of the war,” according to the jury.

The young jury consisting of directors Rok Biček, Damir Markovina and Milan Trenc awarded the Little Stamp. The award for the best film by a young author this year went to Vietnamese director Diễm Hà Lệ for Children of the Mist, “a naked, honest, fantastically presented story of family and individual struggle, tribe and state, conservative tradition and personal freedom.” A Special Mention was given by the Young Jury to the Lebanese author Karim Kassem for the film Octopus.

The Movies That Matter Award for the best human rights achievement went to Danish director Simon Lereng Wilmont’s A House Made of Splinters. “Technically excellently executed and full of empathy, the film brings us closer to children’s experiences with dignity and respect,” said the jury consisting of film critic Carmen Gray and directors Janko Baljak and Srđan Kovačević. A Special Mention was given by the jury to the film Imad’s Childhood by Zahavi Sanjavi.

Members of the International Federation of Film Critics FIPRESCI, Petra Meterc, Pierre-Simon Gutman and Marko Njegić, presented the eponymous award to Valerie Blankenbyl’s The Bubble which “manages to be intimate and socio-political, humane and humorous, serious and ironic.”

The Teen Dox Award, which is given to a film from the programme of the same name that speaks best about the problems of young people, was decided by the students of the School of Art, Design, Graphics and Clothing in Zabok. The Teen Dox Award went to a touching short film on the often tabooed topic of losing parents, Yaren and the Sun, directed by Renate Raman and Joren Slaets. “A highly emotional film that encourages soul-searching (…) with its content and cinematic means of expression definitely evokes emotion,” said the Teen Dox jury.

The My Generation Award, given by the founder and director of ZagrebDox Nenad Puhovski, went to the Italian veteran director Marco Bellocchio for the film Marx Can Wait. “Of all the films I have awarded the My Generation Award to so far, this one is perhaps the closest to me. Not because of 1968, when the event that triggers this story takes place, but above all because of the dilemma that is summed up in the title of the film. Namely, in this film, the author answers the question of the relationship between social and even revolutionary events in the face of personal loss, and even guilt. The story is immersed deep in the author’s intimacy and the courage to talk about it deserves far more than this modest award,” reads Nenad Puhovski's explanation.