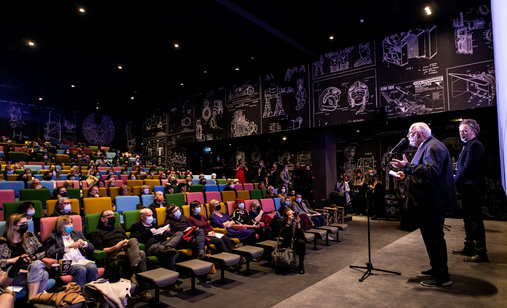 This year’s eighteenth edition of the ZagrebDox International Documentary Film Festival opened on Sunday, April 3, at the Kaptol Boutique Cinema in Zagreb with a screening of the film Summer Nights by Israeli director Ohad Milstein. This gentle and intimate achievement, according to the director who presented his film in front of a crowded audience, skilfully evokes a view of the world from a child’s perspective, full of curiosity and freshness. Ahead of the screening, the audience was addressed by the director of ZagrebDox Nenad Puhovski and producer Hrvoje Pukšec, and the Deputy Mayor of the City of Zagreb Luka Korlaet declared the festival open.

“It is our eighteenth birthday, and we are entering adulthood with an important ‘gift’ and recognition: a few days ago ZagrebDox was included in a prestigious list of only thirty of the world’s best film festivals whose winners directly qualify for the European Film Academy Awards. But our coming of age is obligatory; at a time when one slap in the face at a recent awards ceremony has made just as many, if not more headlines than the thousands of casualties and dozens of destroyed cities in Ukraine, it is our obligation as a documentary filmmakers to work on – remembrance. It is only seemingly paradoxical that, on the one hand, oblivion allows us to deal with life’s trials and tribulations, while collective memory and history make us what we really are: conscious human beings,” said ZagrebDox Director Nenad Puhovski at the opening ceremony.

ZagrebDox producer Hrvoje Pukšec thanked the patrons, partners and sponsors: the City of Zagreb, the Croatian Audiovisual Centre, the Zagreb Tourist Board, the Croatian Film Directors Guild, numerous embassies, cultural institutes and companies and welcomed the new sponsor – Zagrebačka banka. The Deputy Mayor of the City of Zagreb, Luka Korlaet, officially declared the festival open and pointed out: “Documentaries open a window to the world and new perspectives, they raise awareness about the Other and the Different and today adult ZagrebDox has been committed to this noble role all these years and made us more empathetic and sensitised – in short, to better people. The number and quality of films indicate that an extremely informative and intriguing film week is coming.”

In the next week, ending on Sunday, April 10, almost 90 film titles will be shown, and ZagrebDox will host numerous filmmakers who will personally present their achievements to the audience. A number of film experts are guests at ZagrebDox Pro, a section intended for young professionals who will present their projects to this year’s mentors, Finnish TV editor Sari Volanen and Serbian director Želimir Žilnik. The host and moderator of ZagrebDox Pro is the Croatian documentary filmmaker Igor Bezinović.