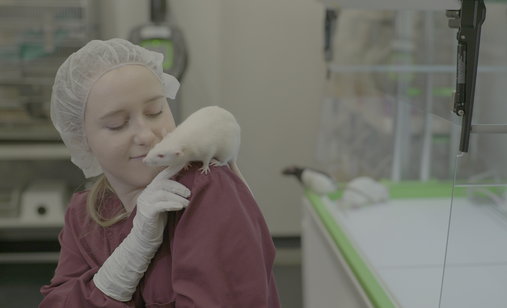 +
Violetta is an ambitious toxicology student convinced that animal testing is inevitable for reliable data in medical research. While handling the rats in the lab, her own beliefs are put to test.

Marina-Evelina Cracana completed her film degree at the Scotland Screen Academy in Edinburgh. Her short film The Fuel Filter (2017) won the Best International Documentary Award at AKIFF 2018. The latest feature documentary she produced, Earth: Muted (2021), had its premiere at the Tempo Film Festival 2021 and was bought by SVT and ARTE France. She participated in prestigious training programmes such as EURODOC and Aristoteles Workshop, and pitched projects at established industry events and film forums such as Nordisk Panorama, Medimed, Zagreb Dox Pro and When East Meets West. She is currently producing four feature documentaries alongside Oscar Hedin at Film and Tell.

Produced by:
Film and Tell