The Last Days of the Ceaușescus 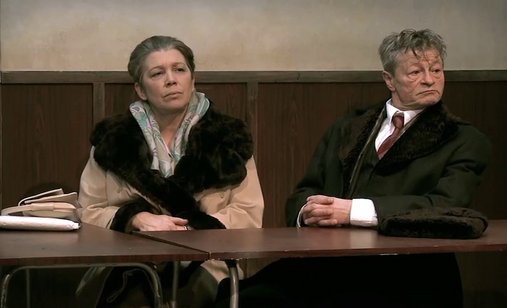 The images of the condemnation and execution of dictator Nicolae Ceaușescu and his wife Elena on Christmas Day in 1989 are etched deeply in the collective unconscious of several generations of television viewers. Exactly 20 years after its occurrence, the famous show trial was re-enacted in a historically reproduced setting. The film interweaves the stage production with interviews conducted with eyewitnesses and archive material, and takes a look backstage in the Odeon Theatre in Bucharest.

Milo Rau is writer and director, and artistic director of NTGent theater in Belgium. He studied sociology, German and Romance languages and literature in Paris, Berlin and Zurich. Since 2002 he has published over 50 plays, films, books and actions for which he has received numerous awards. His theater productions have been shown at all major international festivals and have been touring in over 30 countries worldwide. Rau's films, including The New Gospel (2020), The Congo Tribunal (2017), Hate Radio (2014), The Moscow Trials (2013), The Last Days of the Ceausescus (2010) have been awarded many prizes including a Special Award at the Festival des Deutschen Films, the Zürcher Filmpreis or the Amnesty International Prize. In addition to his work as a director, Rau is also a critic, lecturer and prolific writer with 15 publications to date, which have been translated into English, French, Italian, Dutch, Chinese and Norwegian, among others. Rau's literary work has been awarded some of the most prestigious German literary prizes.

The Last Days of the Ceaușescus