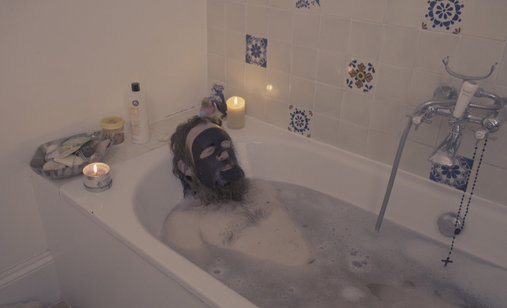 The third day of the festival also begins with free screenings at 3 pm at the &TD Theatre and MM Centre, when the films Socks on Fire by Bo McGuire and White on White by Viera Čákanyova will be replayed. The programme at the SC Cinema will start with the film A Rifle and a Bag by Cristina Hanes, Isabelle Rinaldi and Aryja Rothe at 4 pm, after which three films on various family topics will be shown starting at 6 pm: Now I am Irena, in which Croatian director Jasmina Beširević approaches the acute issue of domestic abuse in an interesting way, the autobiographical piece My Uncle Tudor by Olga Lucovnicova which deals with dealing with traumatic childhood events, while in the film Wait for Me Damir Markovina through the relationship of his mother and grandmother focuses on aging, but also the thin line between love, duty and sacrifice. At 8 pm, two more premieres of Croatian productions are scheduled: the film Journey Home will be presented by director Petar Vukićević, and Renata Lučić with her directorial debut Only the Sky Is the Limit about the cultural and social renaissance brought to Pakrac by the establishment of the futsal club Dudovo bure. At 10 pm, two works about young Parisians will be shown at the same location: Episodes – Spring 2018 by Mathilde Girard, a masterfully edited depiction of a new generation, and Jungle by Louise Mootz, an intimate but energetic portrait of young Parisians.

The search for love took the protagonists of the film Bitter Love by Jerzy Sladkowski to a kind of ‘floating dating agency’ – the ship Maxim Gorky, and the film is shown at the &TD Theatre at 5 pm. In the same hall at 7 pm The Filmmaker’s House by Marc Isaacs is scheduled, a distinctive and original piece that speaks in a witty and self-ironic way about the film medium itself, as well as the modern version of the role of the ‘good Samaritan’. At 9 pm at the &TD Theatre, the film Punta Sacra by Francesca Mazzoleni will take the audience to Ostia, at the delta of the Tiber, where they will meet a female household that resists the challenges of life in the suburbs of Rome.

In the MM Centre at 5 pm, there are five short domestic productions on the program: God on Wheels by Bela Bračko Milešević, Do You Feel Nervous When I Approach You by Sara Alavanić, Hotel Mama by Jozo Schmuch, Last Days of the Year by Marko Bičanić and Between Summers by Anja Koprivšek. At 7 pm, the film Salomé Jashi’s Taming the Garden about a completely unusual hobby of the former Georgian Prime Minister will be screened at the same location. The latest title of the famous Chinese artist, activist and filmmaker Ai Weiwei – Coronation – is scheduled for 9 pm. The film program Thriller Dox starts on Wednesday, which will bring an exciting film title to the screen of the Tuškanac Open Air Cinema every night at 9.30 pm, until Saturday, and the first in a series is Inside the Red Brick Wall, which follows a dramatic episode in the current Hong Kong fight for democracy.

ZagrebDox Pro will host the coordinator of the industry segment of the Lisbon International Festival Doclisboa, Glenda Balucani, and Miguel Ribeiro, one of the directors of this festival. They will present the Nebulae programme for film professionals networking on Wednesday at 7 pm at the SC Gallery. The aforementioned industry event provides space for the networking of film professionals, and takes place during Doclisboa. Each year, the Nebulae Programme Committee invites a partner country and film professionals from that country to present their up-and-coming projects and films. This year, with the support of the Croatian Audiovisual Centre, Doclisboa is hosting Croatian filmmakers and their projects, Croatian productions or co-productions. We kindly ask all those interested to register their arrival by e-mail: pro@zagrebdox.net. The application must state your full name and contact phone number.