The new festival day features the Croatian premiere of Tiha Gudac’s latest film "The Wire", scheduled for 8 pm at the SC Cinema. 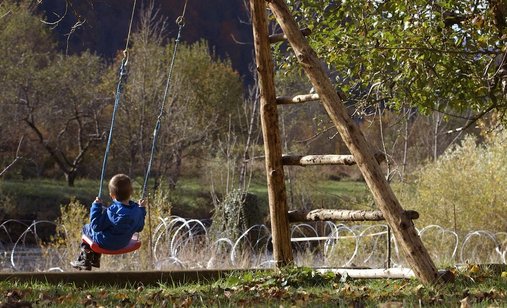 The program begins at 3 pm with free screenings at the &TD Theatre and MM Centre. At 4 pm at the SC Cinema, the film Tales From The Prison Cell by Hungarian director Ábel Viski will be shown, which actually functions as a tool for connecting fathers who are separated from their children and wives due to serving a prison sentence.

At 5 and 7 pm, the MM Centre will host reruns of Croatian films Journey Home of Petar Vukičević, Only the Sky Is the Limit by Renata Lučić, Now I Am Irena by Jasmina Beširević, Wait for Me by Damir Markovina, as well as the film My Uncle Tudor by Olga Lucovnicova.

On Thursday, we present a segment dedicated to the intriguing Swiss stage and film director Milo Rau – his latest film The New Gospel will be shown at 6 pm at the &TD Theatre, and then at 8 pm at the same location Rau’s masterclass called Milo Rau and Paths of Justice: Between Political Theatre and Documentary Film will be shown. Also, during this week, three films by this renowned director will be available on the festival website – the films The Congo Tribunal, The Moscow Trials and The Last Days of the Ceausescus.

At 6 pm in the SC Cinema, the film Lobster Soup will be screened, which will be personally presented by one of the authors, Rafael Molés. The mentioned film follows the inevitable transformation of a small town in Iceland as a consequence of the dominant way of life of the modern world. In the small coastal town of Grindavík lives a community that still relies on fishing, and the dynamics of social life takes place mainly in the local inn of the two brothers, with full bowls of their popular specialty – lobster soup. After the screening of the film, the author will present the film in a Q&A.

Director Tiha Gudac will present her new film The Wire at ZagrebDox, which arrives just after its world premiere at the largest German documentary film festival DOK.fest Munich, and documents the dynamics of a border area on the banks of the Kupa river, the border between Croatia and Slovenia which has for many become a very tangible barrier on the refugee journey to a safer life. The screening will take place at 8 pm at the SC Cinema, followed by a Q&A.

At 9 pm in the MM Centre, a film from the section Teen Dox, A Glitch In The Matrix by Rodney Ascher is scheduled, while a film from the regional competition, Colours of Tobi by Alexa Bakony, will be shown at the same time at the &TD Theatre.

At this year’s new location – Tuškanac Open Air Cinema at 9.30 pm, a film from the Thriller Dox section, The Dissident by Bryan Fogel will be screened.

The festival day ends with a screening at 10 pm at the SC Cinema – the film Easy Love by Tamer Jandali from the Love section; this experimental piece, which in a combination of documentary and fiction follows seven men and women on an often turbulent search for happiness, is characterised by unbridled immediacy and follows the love affairs of the younger generation of urban Germans in Cologne in the rhythm of electronic music.