The screening of a tender family documentary with a message of peace, directed by Ukrainian filmmaker Iryna Tsilyk, launches the new edition of ZagrebDox this Sunday. 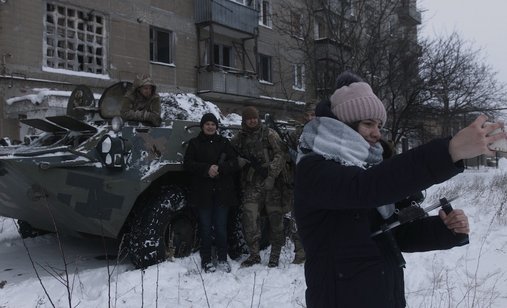 This year’s, seventeenth edition of the ZagrebDox International Documentary Film Festival opens on Sunday, June 13 at 8 pm in the SC Cinema of the Student Centre in Zagreb with the award-winning film The Earth is Blue as an Orange by Ukrainian director Iryna Tsilyk.

Winning numerous awards, including Best Director at the Sundance Film Festival and a Grand Jury Prize at the Seattle International Film Festival, this observational documentary follows a single mother living with her four children in a war zone in eastern Ukraine. The masterfully recorded work skilfully tells the story of a family that, in everyday life marked by the constant threat of war destruction, does not allow fear to completely take over their lives. The small family is busy shooting a film based on everyday life, where each member has his role in the film and in the process of its creation. This evocative work with a pacifist message, named after a verse by the surrealist poet Paul Eluard, shows how the film medium and artistic expression can become a powerful means of overcoming the absurdity of war.

The feature debut by this young director, screenwriter and writer, who will present the film live to the audience of ZagrebDox, is part of the international competition of this year’s festival edition, where she is competing for the main prize, the Big Stamp. The same award will be given at the closing of the festival to the author of the best film in the regional competition, while the Small Stamp will be awarded to a director up to 35 years of age. Thirteen world premieres of Croatian films and a number of film titles coming to the Zagreb screen from festival tours await the audience at the festival, and among them are new achievements of great directors such as Ai Weiwei, Viktor Kossakovsky and Avi Mograbi, this year’s winner of the My Generation Award, awarded by the director of ZagrebDox, Nenad Puhovski, for an exceptional contribution to documentary filmmaking. A total of 84 documentaries in 12 segments will be screened at the SC Cinema, MM Centre and &TD Theatre during eight festival days, until June 20, while exciting titles from the Thriller Dox section will be screened in the green oasis of the Tuškanac Open Air Cinema.

In addition to the film programme, where part of the screenings will be accompanied by Q&As with filmmakers, ZagrebDox also includes a number of events. Thus, in addition to the retrospective program Female directors in Croatian documentary production, a round table on the role and achievements of directors in Croatian documentary production will be held on Tuesday, June 15 at 12:00 in SC Gallery, hosted by the programme curator Diana Nenadić, to gather directors and their colleagues from the field of cinema. On Thursday, June 17 at 8 pm at the &TD Theatre, visitors will be able to follow a pre-recorded masterclass by the famous Swiss theatre and film director Milo Rau. The award-winning author, one of the most interesting and controversial European artists who staged his new play at the end of last month together with young literary star Édouard Louis, will talk about his work with film curator and critic Vladan Petković about some of the acute problems of today. The masterclass will take place after the screening of Rau’s latest film New Gospel, and the other three titles from the retrospective dedicated to that author will be available to viewers of ZagrebDox online during the festival. This year’s Author’s Night focuses on director Rajko Grlić, president of the upcoming ZagrebDox’s International Jury. This great Croatian filmmaker will reveal to visitors on Saturday, June 19 at 11 am in the MM Centre how and why he made a documentary about another great artist, Edo Murtić. ZagrebDox Pro will also host the coordinator of the industry Section of the International Festival in Lisbon Doclisboa Glenda Balucani and Miguel Ribeiro from the festival management, who will present the Nebulae programme for networking film professionals on Wednesday, June 16 at 7 pm in the SC Gallery.