Next to a special programme section dedicated to love, several other titles speak about love and partnership and the universal need for closeness. 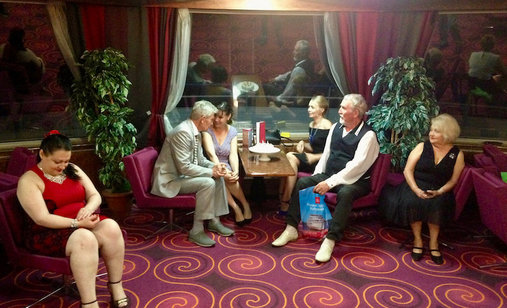 The 17th ZagrebDox takes place from 13 to 20 June at several locations in Zagreb: SC Cinema, &TD Theatre and MM Centre of the Student Centre in Zagreb, and Tuškanac Open Air Stage. The festival thus features over 80 film titles in a new slot, with more a favourable weather and adapted to the current situation, aiming to bring together audience and documentaries from all over the world in a safe environment.

Partly as a reflection of emotions contained in long-term isolation and solitude caused by the global situation in the past period, as well as a constant preoccupation and a search for contact and closeness, some of the titles focus on love through partnership. The current events and limitations put this subject matter in an added context. This year’s new programme section LOVE includes four titles connected by theme, each with its own respective insight into intimate tales of love.

Documenting Russian travellers on a cruise on the Volga, the Polish documentary director Jerzy Sladkowski in Bitter Love records their need for – love. The Maxim Gorki ship is a hook-up agency of sorts. The cruise includes fun, music and large amounts of alcohol. Against the backdrop of today’s circumstances, this film dissects human behaviour before and after the pandemic – the freedom and possibilities we used to take for granted until recently are now almost unthinkable, resulting in a different perception of the film and an added value in the context of the life we now lead.

A search of love is the red thread in the German film Easy Love by Tamer Jandali. This experimental piece, a combination of documentary and fiction, follows seven men and women on an often turbulent search for happiness. It is characterised by immediacy and to the soundtrack of electronic music it follows the romantic adventures of a young generation of urban Germans in Cologne.

Teenage love is in the focus of the short film Tender by French filmmaker Isabel Pagliai, the best short documentary at this year’s Dokufest. The film, set in late summer on a small lake, unmasks the relationships between a group of girls and boys, their tension, attraction and the insatiable desire for socialisation. Od tebe sam sretan by David Bakarić is one Croatian title in this love section, focusing on two individuals who met in Skopje and meet again in Croatia.

ZagrebDox is hosting the world premiere of the film Love around the World by Anđela and Davor Rostuhar in regional competition. Travelling to the farthest corners of the globe, from deep in Amazon forests and remote villages in the Himalayas, to small Pacific countries and African slums, to the biggest metropolises, the filmmaker duo are recording 33 different stories of love and marriage, challenges and struggles, ups and downs. This stunning documentary connects a broadest spectrum of cultures and identities through the universal emotion of love.

Love and partnership appear in several other titles: international competition includes the shocking and moving portrayal of an Iranian family Radiograph of a Family, the best documentary at IDFA. Director Firouzeh Khosrovani speaks about her growing up and identity through the relationship between her parents which – although based on love – is marked by opposite values, the clash between the traditional and the contemporary, between total commitment to Islam on the one hand and the mundane and progressive on the other. Fragments of their intimacy reflect the conflicts in recent Iranian history.

In the Controversial Dox section, the film Love, It Was Not features a story about the impossible and tragic love affair between Helene, a young Jewish prisoner in Auschwitz, and an Austrian SS general who saved her life. Thirty years after this affair the general’s wife invites Helene to testify for him in court and thus return the favour.

This year’s author’s night is dedicated to Rajko Grlić, also the chair of ZagrebDox’s international jury. The programme includes the film under the title Every Good Story Is a Love Story, in which Grlić and his co-director Matjaž Ivanišin film the process of staging a play and portraying the personal relationships between the people making it: writer and director Dušan Jovanović, actress Milena Zupančić and actors Radko Polič and Boris Cavazza. This is a note on a love triangle and an open tale of the public and private lives of artists.