Ahead of Mother’s Day, we singled out several titles from ZagrebDox’s line-up of films in which mothers play the key role. 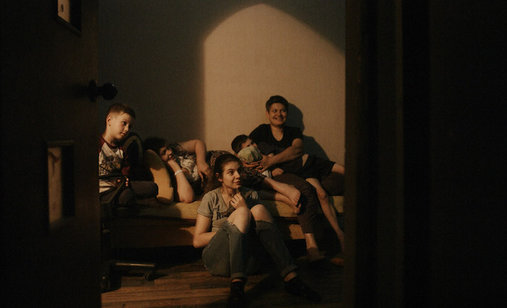 The second Sunday in May is traditionally in many countries, including Croatia, dedicated to mothers. Ahead of Mother’s Day, in the upcoming edition of ZagrebDox we selected several films in which mothers – as in life in general – play the key role.

The international competition category screens the film The Earth Is Blue as an Orange, Iryna Tsilyk’s feature-length debut, the winner of the best director award at Sundance. This observational documentary follows a single mother who lives with four children in a war zone in eastern Ukraine. In a daily life rife with constant war threats, it is the mother Anna who runs the show of family optimism and creativity, not letting fear to rule their lives. Anna’s children, led by the eldest daughter Mira who wants to become a cinematographer, are involved in making a film based on their daily life. Every family member has a role in the film and the process of its making, and it is Anna’s task to edit the images, making a new coherent unit out of fragments. In the general nonsense of war, to this family film becomes a powerful tool and means of creating a brand new meaning and sense.

The short Belgian film Don’t Hesitate to Come for a Visit, Mom is also part of this year’s international competition. In this autobiographic film, Russian director Anna Artemyeva films the relationship with her three-year-old daughter. The mother studying in Belgium and the daughter living with her father are currently thousands of miles and a visa away, and they keep their daily contact via video calls. This touching piece about childhood and motherhood points to a strong emotional tie not even physical distance can challenge, just like motherly love and care doesn’t fade when children grow up. In the film Hotel Mama, in this year’s regional competition, Croatian director Jozo Schmuch portrays Valerija, a mother of two grown-up children. In between regular phone calls and family lunches, Valerija reveals her story, intertwined with the memories of her children’s growing up and gaining independence, as well as the tragic loss that left a deep trace, but additionally connected the family.

Young mothers balancing between busy daily lives which leave them little room for themselves and emotional turbulence and the feeling of loneliness are in the focus of Clean with Me (After Dark), screened in State of Affairs. While their husbands work, these housewives make YouTube tutorial vlogs about cleaning and housework, seeking in the online community a chance for socialisation and support. Nevertheless, in Gabrielle Stemmer’s skilful editor hands, short videos turn into an empathetic portrayal of young women whose experiences confirm mothers’ often neglected contribution – to both households and the society in general. So let us tell them, as Valerija’s daughter says in Hotel Mama: “Grazie, madre!”