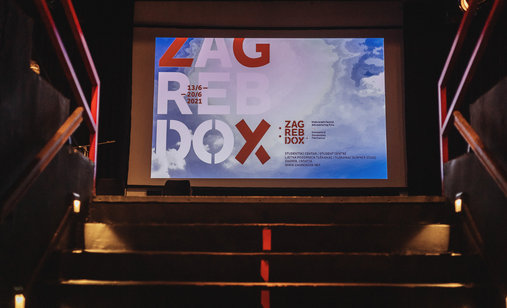 After a year in which the arrival of filmmakers at the festival was completely prevented, we are pleased to announce that during the next week about twenty filmmakers will arrive in Zagreb, whose films we will see at the 17th ZagrebDox.

A 'master' documentary filmmaker, renowned Israeli director Avi Mograbi, arrives at the festival. His works focus mainly on the Israeli-Palestinian conflict, questioning how violence affects the individual. In this year’s Masters of Dox section, we will be watching his new film The First 54 Years – An abbreviated manual for military occupation in which he functions as a commentator on the longest military occupation in modern times – the Israeli occupation of Palestinian territory. Avi Mograbi is also this year’s winner of the My Generation Award, which is awarded by the director of ZagrebDox, Nenad Puhovski, for an exceptional contribution to documentary filmmaking.

A number of authors whose films are part of this year’s international competition are also coming to Zagreb: from Iran, director Firouzeh Khosrovani, who in the film Radiograph of a Family (winner of the Amsterdam International Documentary Film Festival (IDFA), through a family portrait, speaks about her own identity based on the conflicting worldviews of her parents. Ukrainian director Irine Cilik is presenting her feature debut at ZagrebDox, the film The Earth is Blue as an Orange, which won the Sundance Award, in which she documents the everyday life of a family within the war zone in eastern Ukraine from the point of view of a single mother. The Swiss-Albanian documentary filmmaker Dea Gjinovci is also coming to the festival. In her film Wake Up On Mars, she captures a mysterious phenomenon that has plagued Sweden for the past two decades – a resignation syndrome that affects almost exclusively children of asylum seekers in that country; director Natalia Yefimkina will personally present the film Garage People, which follows lives in garages that befell many Russians.

ZagrebDox will also host several directors whose films we watch in regional competition: Serbian actress Danijela Štajnfeld, who bravely reveals her own story in the shocking film Hold Me Right to open up a space for traumatic experiences of victims of sexual violence; Hungarian director Alexa Bakony, who in her feature debut Colors of Tobi follows a transgender adolescent on a turbulent path to growing up and maturing; Cristina Hanes and Isabella Rinaldi who have directed the documentary A Rifle and a Bag about the struggle of parents to ensure a happy and secure future for their children; Romanian director Tudor Platon, who in the film House of Dolls follows a group of 70-year-old women who, far from their husbands and daily routines, exchange the small joys of life.

The festival will also host several authors whose films will be screened in the accompanying sections of the festival: Rafa Molés is one of the screenwriters of the film Lobster Soup about a small town in Iceland, which is part of the State of Affairs section. Another guest is the author of Teenage Lockdown Tales from Teen Dox, Marie-Pierre Jaury, whose film paints a portrait of adolescence from the Paris suburbs in 2020, marked by a pandemic. German author Tamer Jandali will present the film Easy Love, which is screened in a special, new Love section this year, and follows the love affairs of the young generation of urban Germans in Cologne.

The international jury of this year’s festival consists of director, screenwriter and producer Rajko Grlić, editor Vesna Biljan Pušić and Russian director Ilya Povolotsky, whose film Froth was awarded the Big Stamp for the best film in the International Competition and a special mention of the young jury at ZagrebDox 2020.

The regional jury consists of award-winning local director Đuro Gavran, Romanian director, cinematographer and investigative journalist Radu Ciorniciuc, and film historian and curator Jasmin Basic. The young jury will decide on the winner of the Small Stamp for the best film by an author under 35, consisting of: producer and curator Lejla Dedić, promoter in the film industry Mirjam Wiekenkamp (arriving at ZagrebDox) and psychologist and scholar Boris Jokić. The Movies That Matter award is given to a film that best promotes human rights by a jury composed of: producer and festival programmer Oliver Sertić, Iranian filmmaker, producer, photographer and researcher Mehrdad Oskouei and dean of the Academy of Dramatic Art Franka Perković Gamulin. The members of the FIPRESCI jury are: film critic Ruggero Calich, film critic and associate professor at the Danish School of Media and Journalism in Aarhus Steffen Moestrup (arriving at ZagrebDox) and Canadian film critic and writer Justine Smith. The Teen Dox jury consists of students from the American International School in Zagreb.