This year’s festival programme includes several films whose protagonists and authors took them as a catalyst of emotions and a tool for facing daily life. 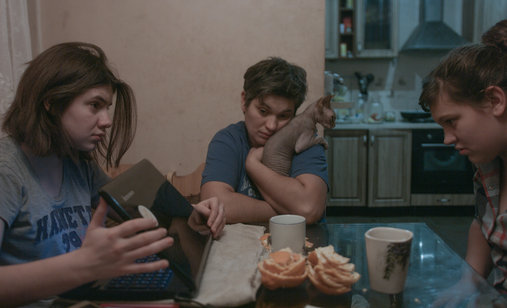 Numerous topics and creative preoccupations are present in this year’s film programme of ZagrebDox, and several titles stand out in which the authors and protagonists use the film medium in order to deal with (un)unusual circumstances, everyday situations, the conditions they live in and the challenges the modern society face them with. Documenting their daily lives brings them certain of relief, and the recorded material becomes a catalyst for their emotions and states.

The Earth is Blue as an Orange, a feature-length debut by director Irina Cilik (international competition), the winner of best director award at Sundance, is an observational documentary about a family of a single mother and four children living in a war zone in eastern Ukraine. In her daily life, marked by a constant threat of war destruction, it is the mother Ana who pulls the strings of family optimism and creativity, not allowing the fear to take over their lives. Ana’s children, spearheaded by their eldest daughter Mira, who wants to become a cinematographer, are busy making a film based on own their daily life. Each family member has a role to play in the film, but also in the process of its making, and Ana’s task is to edit the footage, creating a new, coherent entity from the recorded fragments. In the overall nonsense of war, to one family film becomes a powerful tool and a tool for creating a completely new meaning and significance.

Radiograph Of A Family(international competition), the best documentary at last year’s edition of IDFA, is a moving and touching portrait of an Iranian family. In it, director Firouzeh Khosrovani speaks about her own upbringing and identity through a mother-father relationship which – although based on love – is marked by a gap between conflicting values, between the traditional and the contemporary, between total devotion to Islam on the one hand and secular and progressive outlooks on the other. Conflicts of recent Iranian history are thus reflected in the elegantly edited fragments of their intimacy – family photographs, videos and letters.

In the film Tales from the Prison Cell (regional competition), the Hungarian filmmaker Abel Visky uses film as a means of connecting those who are legally prevented from doing so – prisoners and their families. Fathers serving prison sentences are given the task of writing fairy tales about their children; these fairy tales are then translated by the director into short films starring their families. Aiming to help families bridge separation, Visky points to the transforming power of art. The struggle with isolation in prison becomes for some an almost unbearable battle with paranoia, so these fairy tales, a gift to their families, become a way for them to tell an untold truth. Fairy tales become a path to imagination – the only place where these families can truly be together.

The short Belgian autobiographical film Don't Hesitate to Come for a Visit, Mom (international competition), in which the Russian director Ana Artemyeva makes a record of her relationship with her three-year-old daughter, also speaks about separation within the family, as well as bridging it by way of modern technology. The mother studying in Belgium and the daughter living with her father in another country are currently separated by thousands of kilometres and a visa that has not yet been approved. The mother and daughter maintain daily contact and connection through video calls, which become the backbone of their relationship, a virtual substitute for physical contact.

The short film by the Spaniard Pol Mallafré The Reality of Confinement with a Four-year-old (international competition) through the form of a video diary of a young couple speaks about the challenges and limitations after 15 days of captivity with his four-year-old daughter due to quarantine caused by the coronavirus pandemic. It is an entertaining depiction of the ups and downs of an isolated family, and a series of daily episodes includes all the challenges of parenthood: from daily routine and fatigue, occasional failures, to struggling with boredom and social media addiction.

The consequences of quarantine and lockdown, again in the form of a video diary, are also examined in the French film Teenage Lockdown Tales (Teen Dox section). The creative duo Charlotte Ballet-Baz and Marie-Pierre Jaury gathered five high school students from the Parisian suburbs and invited them to share their quarantine experiences with them via footage recorded on their smartphones. How do teenagers live out their years when everything that is a key part of that period – friends, going out, school, sports – becomes inaccessible? Teenage Lockdown Tales is a portrait of adolescence in a pandemic that marked the year 2020: isolated in their own rooms, these five teenagers re-examine themselves, each other and grow up during that time.

Award-winning Marc Isaacs, one of Britain’s most prominent documentarians, talks about contemporary Britain in The Filmmaker’s House (Controversial Dox section), but also about the pressures of commercial cinema and creative crisis. Faced with an ultimatum set by the producers, Isaacs decides to break with their conditions and do something completely different: point his camera at those around him. Connecting with different individuals, making the processes of acquainting and interacting an integral part of his film, the director hosts at his own home and films a whole spectrum of protagonists: two builders, a Pakistani neighbour, a Slovak homeless man, a Colombian housekeeper. The Filmmaker’s House combines documentary with fiction, intertwining humour with intense emotions, resulting in a work that questions the act itself, as well as the nature of filmmaking.