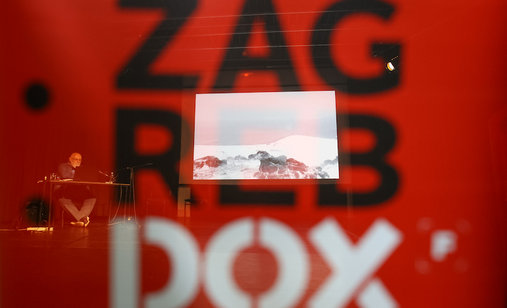 Zagreb, 28 May – This year, the seventeenth edition of the ZagrebDox International Documentary Film Festival will be held from June 13 to 20 at several locations: at the SC Cinema, the &TD Theatre and the MM Centre of the Student Centre in Zagreb, and at the Tuškanac Open Air Cinema. During the eight days of the festival, the audience will be able to see 84 current documentaries in 12 film sections. For the Big Stamp, the official festival award, 18 films are competing in the category of international competition, 20 documentaries in regional competition, while the Small Stamp Award will be given to the best film by an author under 35 years of age. This year’s festival programme was presented by the festival director and main programmer Nenad Puhovski, along with executive producer Petra Blašković.

“After successful last year’s festival in its special edition at the beginning of autumn, we are extremely glad that this year we have found a way to bring current documentary production closer to our audience. One special feature of our festival is, we always repeat, in encounters, exchange and discussion. Therefore, it is inconceivable that the documentaries presented by ZagrebDox for the 17th year in a row are not consumed in cinemas and then we do not exchange attitudes, perspectives, emotions that the films we have aroused in us. We are happy, after a long isolation and the past challenging months, to have the opportunity to present films and thus offer the audience content, encourage communication and enable (for now) at least through the cinema screen to slip into some distant parts of the world,” said Nenad Puhovski.

Among the acclaimed titles in international competition is (the first) Chilean Oscar nominee, The Mole Agent by Maite Alberdi, the winner of a series of awards (Cinema Eye Honours Award, audience award at the San Sebastian Film Festival) that follows the 83-year-old on a secret mission in a nursing home. The Iranian film Radiograph of a Family, the winner of the Amsterdam International Documentary Film Festival (IDFA), is a portrait of the family of Firouzeh Khosrovani whose identity rests on the conflicting worldviews of her parents. Family dynamics, but also survival within the war zone in eastern Ukraine from the point of view of a single mother, is in the focus of the feature debut by director Irina Cilik, the film The Earth is Blue as an Orange, which won a prize for directing at Sundance, while in the short film Don’t Hesitate to Come for a Visit, Mom (IDFA Spotlight Award), by Ana Artemyeva, records the separation from her own daughter, which she replaces with video calls. In the form of a video diary, the short film by the Spaniard Pol Mallafré The Reality of Confinement with a Four-year-old speaks up in an entertaining way about the challenges of a young family due to quarantine caused by the pandemic. Sock on Fire by American director Bo McGuire (the best documentary at the Tribeca Film Festival) follows the new dynamics after the death of the head of the family, as well as the conflicts between his childhood idols – homophobic aunts and gay uncles. The mysterious phenomenon that Sweden has been recording for 20 years – the resignation syndrome that affects almost exclusively children of asylum seekers in that country – is discussed by filmmaker Dea Gjinovci in the film Wake Up On Mars, filming a Roma family whose two children fell ill from this unexplained disease.

The author Viera Čákanyová in White on White records a stay at a Polish station in Antarctica where she communicates with various forms of artificial intelligence, while the German film Garage People by Natalia Yefimkina follows the phenomenon of life in garages that has befallen numerous Russians. Director Alain Kassanda portrays the third largest city in Nigeria (Golden Dove at Dok Leipzig) from a street perspective in Trouble Sleep, and the focus of Argentine Alejandro Telémac Tarraf’s The Lonely Rock (Piedra sol) is a llama family from an Argentine plateau. The tragically deceased Iranian director Rahim Zabihi in the film Holy Bread had been following Kurdish smugglers for nine years, trying to feed their families by transporting goods across the Iranian border, on a long and dangerous journey through mountainous landscapes.

Shadows of Your Childhood by director Mikhail Gorobchuk (best documentary at the Tampere Film Festival) is a poetic šiece that offers an insight from a child’s point of view, while Roman Hodel’s multi-award-winning short The Game follows a football match in the Swiss first league from the point of view of the world-famous referee Fadayi San. Through a series of shocking records of communist-controlled life in Poland, Tomasz Wolski’s film An Ordinary Country speaks up, while the theme of the short film Huntsville Station by Jamie Meltzer and Chris Filippone portrays the first moments of freedom of former prisoners in the eponymous state penitentiary in Texas (best short film at Docaviv). In the film Downstream to Kinshasa, director Dieudo Hamadi follows the victims of the Second Congolese War who are seeking compensation for the pain they have suffered after twenty years. The unusual hobby of the former Georgian prime minister is at the heart of the film Taming the Garden by Salomé Jashi; he buys centuries-old trees, has them dug up and moved to his private garden. Uprooted, metaphorically and literally, the inhabitants are forced to adapt to the new change.

There are as many as eleven Croatian titles in regional competition. Immediately after the premiere at the largest German documentary film festival DOK.fest Munich, Wire arrives at ZagrebDox. Tiha Gudac’s new film focuses on the border area along the Kupa River – a territory that divides Croatia and Slovenia, a place where the Schengen border polarises Europe and razor wire stops refugees from Bosnia and Herzegovina trying to reach Western Europe. The love that knows no boundaries and transcends all differences is the theme of the documentary Love Around the World by the duo Anđela and Davor Rostuhar, and the togetherness and socio-cultural renaissance encouraged in Pakrac in the 1980s by the Dudovo bure indoor football club is the focus of Only the Sky Is the Limit by director Renata Lučić. In the film Wait for Me, director Damir Markovina follows the relationship between his mother and grandmother, talking about the thin line between love, duty and sacrifice. The dynamics of family relations permeate the films Hotel Mama directed by Jozo Schmuch and Journey Home by Petar Vukičević, while the changes that the current pandemic has brought to family and home everyday life are documented in the film Do You Feel Nervous When I Approach You by Sara Alavanić. The devastating earthquakes that have hit central Croatia in recent days, radically changing the usual holiday mood, are the focus of Marko Bičanić’s film Last Days of the Year, while God on Wheels by Bela Bračko-Milešević documents the holy mass in a village near Karlovac a new, ‘pandemic’ outfit. Following the turbulent period of puberty from the perspective of two sisters from a Roma family, the documentary Between Summers by Anja Koprivšek raises the question of whether everyone has the right to a carefree upbringing, and the film Now I Am Irena directed by Jasmina Beširević approaches the issues of family abuse and repressed emotions in a very interesting way.

Traumatic experiences of sexual abuse victims are the subject of the shocking film Hold Me Right, in which director Danijela Steinfeld boldly starts from her own experience and through conversations with the victims raises the question of whether a cure is possible. Olga Lucovnicova’s autobiographical piece My Uncle Tudor approaches the same topic through footage of a family house in Moldova, of which the director keeps childhood memories, but also a shocking experience. Hungarian director Alexa Bakony’s feature debut, Colors of Tobi, follows the transgender adolescent Tobi on a turbulent path to growing up and maturing. In the poetic winner of the Visions du Réel festival Punta Sacra, director Francesca Mazzoleni takes viewers to Ostia, the former seaport of ancient Rome, the ‘holy spot’ where Franca runs a female household. And in Romanian director Tudor Platon’s House of Dolls, there is a community of women at the centre: a group of 70-year-old friends who, far from their wives and daily routines, exchange small joys in life. In the documentary Tales From The Prison Cell by Hungarian director Ábel Viski, film becomes a tool for connecting fathers separated from their children and wives while serving a prison sentence. The challenges of fatherhood are also discussed by Romanian director Andrei Dăscălescu, who in the film Holy Father, waiting for the birth of his first child, searches for his long-lost father. And the impressive documentary A Rifle and a Bag, directed by Cristina Hanes, Isabella Rinaldi and Arya Rothe, follows the struggle of parents, which sometimes involves giving up political ideals, to ensure a happy and secure future for their children. Winning the award for best short documentary at the festival in Jihlava, the film First Birthday After the Apocalypse by Farah Hasanbegović in the form of a cake recipe and in combination with an animated technique focuses on the theme of memory and growing up.

In addition to a handful of titles in the official sections Masters of Dox, Controversial Dox, State of Affairs and Teen Dox, the festival also features the section Love, curated by Nenad Puhovski and the Thriller Dox section, curated by Vladan Petković. Factum’s productions, the film Dubica by Marina Aničić Spremo is premiering at this year’s festival. The retrospective section includes a programme dedicated to the intriguing Swiss theatre and film director Milo Rau, a programme curated by Diane Nenadić that brings together documentary titles by local directors created over the past five decades and an Author’s Evening of Rajko Grlić, who chairs the festival’s international jury.

“We are especially pleased to host numerous Croatian and foreign filmmakers this year who will tell us more about their films in Q&As after the screenings. Traditionally, after the closing of the festival and the award ceremony, on Sunday, June 20, our visitors will be able to see The Best of Fest with the award-winning films of this year’s ZagrebDox, as well as additional screenings of the most sought-after films of the Festival. At this year’s edition of ZagrebDox, the price of a ticket package for Sunday when we screen the award-winning films will be 70 kuna,” said Petra Blašković.

Ticket sales start on Tuesday, June 8 at www.mojekarte.hr and during the festival at the box office in the lobby of the SC Student Centre cinema in Zagreb.