With a screening of "The Earth Is Blue as an Orange" by Ukranian director Iryna Tsilik, this year’s edition of ZagrebDox began, screening around 80 documentaries in 12 segments until 20 June 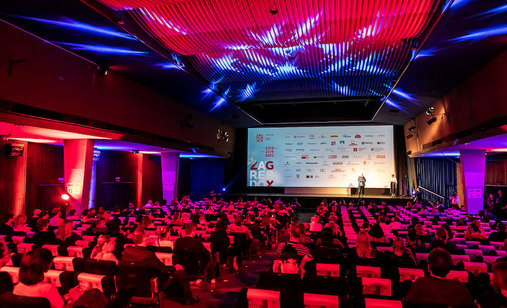 This year’s, 17th edition of ZagrebDox International Documentary Film Festival opened on Sunday, 13 June at the SC Cinema at Student Centre in Zagreb. The festival opened with a screening of The Earth Is Blue as an Orange by Ukrainian director Iryna Tsilik, a touching pacifist family documentary, the winner of the best director award at Sundance Film Festivalu. Ahead of the screening, the audience were addressed by the director of ZagrebDox Nenad Puhovski and Deputy Mayor Luka Korlaet.

“The past year has been difficult for all of us. We were struck by a pandemic and an earthquake, we retreated and shut ourselves in, reducing the world to what could be seen through a small, electronic keyhole - a cell phone, a tablet, a television.I believe that it is time to go out and return to the world, the bigger world that surrounds us. For sure, it is no longer the one we left behind, but it is still ours… the only one we have. In facing of such a world, documentary is certainly one of the best tools. It reminds us that the problems of conflict in the Middle East or the issue of migrants still exist, that ecology or gender equality are not topics that have disappeared by themselves, that this, a real and bigger world, is full of interesting stories, human destinies and emotions that we can share. ZagrebDox has always been a place where you could meet such stories, people and emotions. Welcome to ZagrebDox, welcome back to the exciting, sad, happy, scary, wonderful – our common world,” said the director of ZagrebDox Nenad Puhovski.

Luka Korlaet, Deputy Mayor of the City of Zagreb, officially opened the festival, with the following words: “Challenging situations we’re in as a society have also reflected on this year’s programming, testifying to the relevance of documentary film and its readiness to quickly respond to social changes and challenges of contemporary society, such as the pandemic, wars, earthquakes.In the challenging conditions I find the festival continuity also extremely important. I should especially highlight the educational aspect, personally very close to me, in which this year one of the most prominent and award-winning stage and film directors Milo Rau will pass on his knowledge, as well as Rajko Grlić, whose success as a director and teacher stretches beyond the Croatian borders.Such interdisciplinary approach, complementing the representative one, the programme, makes it possible to train new generations of filmmakers and contributes to fostering documentary cinema in Croatia, the result of which is visible in the number of premieres and mostly by up-and-coming directors, at this year’s festival. I am extremely happy that the festival takes place live, because watching films at theatres contributes to sharing emotions and impressions.”

In the next week, ending on Sunday, June 20, 84 films in 12 different segments will be screened at the SC Cinema, MM Centre and the &TD Theatre in the Zagreb Student Centre and at the Tuškanac Open Air Cinema. Eighteen films in international competition are in the race for the Big Stamp, the official festival award, and in the competition for the same award in the regional section there are 20 titles, with as many as 11 Croatian titles.