Like numerous other film events worldwide, the 16th edition of the International Documentary Film Festival ZagrebDox, which was set to take place 15-22 March, has been postponed due to the COVID-19 pandemic. However, the festival's training programme ZagrebDox Pro has moved online and successfully completed its first segment this week. 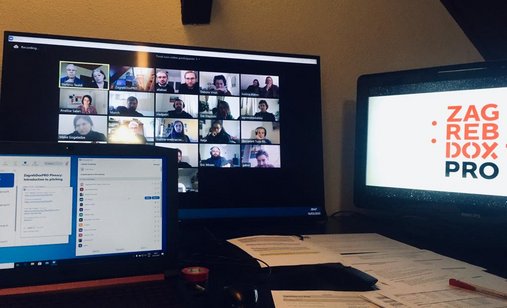 During the four-day preparatory workshop led by mentors Leena Pasanen and Stefano Tealdi, the directors and producers of 12 selected projects from 11 countries worked via video conferencing platform on developing the projects for the final pitching session set for Monday, 23 March.

ZagrebDox director Nenad Puhovski says: "Necessity is the mother of invention, says an old English proverb. Since ZagrebDox is one of the rare festivals that started with a training programme since its first edition, it is no wonder that our great Pro team needed less than a week to create an online version that enabled all the participants to have a collective, live and interactive experience, but also to stay in the safety of their homes. I am very proud that it was a real success!"

"When we realized that we needed to adapt the programme for the online environment, we knew we had to focus on the participants and their projects," explains ZagrebDox Pro producer Marina Burić. "So we came up with the idea of a pitching video as the new format. This approach to presenting a project is closer and more naturally connected to what filmmakers do professionally, and this may be something we will include in our future editions, to complement the face-to-face networking, which remains the main and irreplaceable asset of film festivals and industry events."

"I have never done a pitch in my life and after the first days of ZagrebDox Pro I feel I've learned so many new things," says Anelise Salan, director of the Romanian project Forbidden. "I've also never been in any online meetings, but the tutors broke the distance barriers from the first minutes. In these heavy days of isolation and lockdowns, I feel less alone."

Other participants also cite the feeling of community as a crucial aspect. "ZagrebDox has been a nourishing and valuable experience for myself and our project," says director Dei El Ayoubi who is taking part with the German project The Screw. "The team has worked miracles to make this happen and I'm so grateful for the experience, knowledge, insight I have gained so far, not to mention the sense of solidarity and community."

Italian producer Andrea Tricardi, who is at ZagrebDox Pro with project I've Never Been There, directed by Debora Vizzi, comments: "In these dramatic times, working with a group of people spread all over Europe is a completely new but exciting experience for me. I miss being in the same place with new friends, but the technology helps us to have a new kind of relationship. Being human is the only way to live in this situation, monopolized by COVID-19, and the ZagrebDox team has helped us to stay human."

„The team of ZagrebDox Pro are true pioneers," add director Aliaksei Paluyan and producer Jörn Möllenkamp of the German-Dutch project Courage. "When nobody is allowed to even leave the house, they still unite 12 cultures from around the world to work on their documentary projects, and on the second day you really start to forget that the workshop is virtual."

The project teams will now have three days to prepare a 7-minute video containing their pitch and a project trailer for the final pitching session. The videos will be streamed to the panel of decision makers who will provide live feedback to the participants and an audience of industry professionals.

After the pitching session on Monday, the participants will have one-on-one online meetings with the members of the panel and numerous industry experts and decision-makers who are interested in the projects.

ZagrebDox Pro will officially wrap on Tuesday with announcement of awards: the ZagrebDox Pro Online Mentor Award, consisting of one year of online mentoring by Cecilia Lidin; the HBO Europe Award in the amount of €2,000 for project development; the Al Jazeera Balkans Award, with €1,000 for project development; and the DAE Mentoring Pitch Award, including free DAE membership for the director and producer as well as mentoring sessions.