Love Around the World 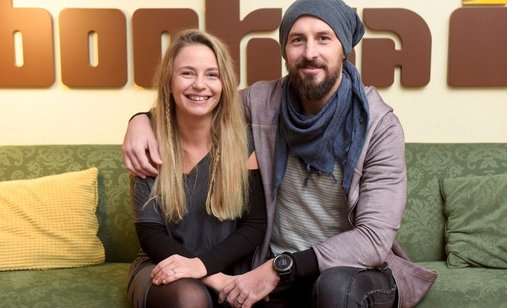 +
A married couple embarks on a 15-month trip around the world in search of an answer to the question – Is love universal?

Davor Rostuhar born in Zagreb in 1982. Studied sociology and history at the Faculty of Humanities and Social Sciences in Zagreb. In 2001 he began to travel around the world and build a career as a traveler, writer and photographer. In 2003 he founded the Club for expeditionism and culture (KEK). He is the author of seven books and he has had numerous photo exhibitions. The most successful one Croatia from the Air has seen by over two million people. In 2018 he became the first Croat and 26th person in history who has traversed his own path from the Antarctic coast to the South Pole. About that expedition he made a documentary The Polar Dream which has been screened in over 160 locations.

Anđela Rostuhar born in Zagreb in 1985. Graduated Economics at the Vern University in Zagreb. From 2004 to 2011 she worked in a tourist agency in Zagreb where she ended up being a project manager. In 2011 she quit her job and moved to Kenya where she spent a year volunteering in the local orphanage and local school. There she was developing social networks and communication strategy which helped the local community. In 2014 she started working in KEK where she is in charge of PR, social networks, finances and project management.

Šimun Kuliš was born in 1984 in Zagreb. He graduated production at the Academy of Dramatic Art in Zagreb in 2009 and then founded Plan 9 production that same year. He has since produced several short, experimental and documentary films along with other commercial formats such as commercials and TV shows. Most notable films: Lora wears Black - screened in Checkers in 2018, feature music documentary, Papaya Make Some Noise (2013) and Chillin’ short film 2012.