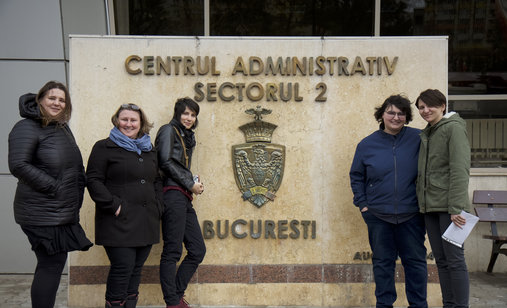 +
Four same sex couples, including the director, decide to go to the Marital Status Department to register requests for marriage although the law doesn’t allow same sex marriage in Romania. Forbidden tells their story and their action at the ECHR.

Anelise Salan is a director in Bucharest. After 12 years of TV work she decided to became a freelancer in the cinematography field. She started as a still photographer – some of her pictures were published in international film festival brochures and press such as Child’s Pose – winner of the Golden Bear 2013. Don’t Die While Dreaming is her first feature-length documentary she co-directed, filmed and edited. It has been selected for 7th edition of the Marburg International Ethnographic Film Festival, Germany 2018 and reached the semi-finals in the competition of International Women's Film Festival (IWFF) 2018 held in Orlando, Florida U.S.

Cristina Iordache is a Romanian-born film and documentary producer. After working as a sociologist and business developer for almost 10 years, Cristina decided to become a film producer. She produced her first documentary Romanian Wooden Churches in 2016 (trailer: https://www.youtube.com/watch?v=XGmS1yzQdcM) – the film got financial support from the Romanian Ministry of Culture. Cristina is currently involved in the production of few documentaries and short films: Fortified Building of Romania (documentary), 42nd of January (short) – both in post-production. She also has in development a short film Vin Indata with the support of Romanian Centre of Cinematography. Cristina is usually a very hands-on producer, working with small teams, for films that have personal relevance to her, combining her sociology knowledge with film production.

Cristian Vasilescu graduated in philosophy in Bucharest and published several novels in Romania. He was head of online development for the biggest Romanian film studio, Media Pro Pictures. One of the shows produced under his supervision was an interactive web series that hit one million viewers within weeks. He is now working in the cinematographic industry as DOP and editor, while developing a film about the birth of democracy in ancient Greece. Cristian also edited (and directed) Romanian documentary Romanian Wooden Churches and the short film 42nd of January, as well as many commercial videos.