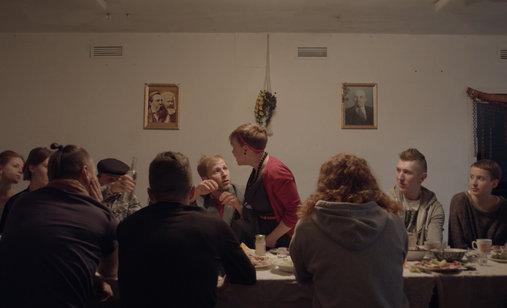 +
For 14 years an underground theatre in Minsk has been proving that artistic freedom in an authoritarian regime is possible. But at what cost?

Aliaksei Paluyan, a film director and writer, was born in the Republic of Belarus. In 2012 he graduated from the Belarusian State University of Informatics and Radioelectronics. In 2012 he moved to Germany and started his academic studies at the Art Academy Kassel in the field Visual Communication specializing in Film and Television under Professor Yana Drouz. Aliaksei’s first creative documentary Country of Women participated in the main competition of the ZagrebDox and received the award “For adherence to moral ideals in cinema art“ at the Minsk IFF Listapad. His last short fiction Lake of Happiness, a Germany-Belarus-Spain coproduction, premiered in Clermont-Ferrand in 2019 and has been screened in competition at Palm Springs, Odense, Drama, Cork, Leeds and Trieste IFF. Lake of Happiness was nominated for German Short Film Awards 2019 and as candidate for the European Film Awards 2020.

Jörn Möllenkamp was born on 4th August 1983 in Münster, Germany. He studied at the department of film and television at the School of Art and Design in Kassel. In 2013 Jörn Möllenkamp co-founded the Living Pictures Production GbR (LPP) that specializes on international independent creative documentaries and artistic fiction films. Jörn has produced over 20 films (both documentary and fiction) which have been screened at more than 200 festivals worldwide. Among them Montreal, Clermont-Ferrand, Edinburgh, Rotterdam, Palm Springs, Cork, Drama and Leeds. His films have been awarded over 40 times.