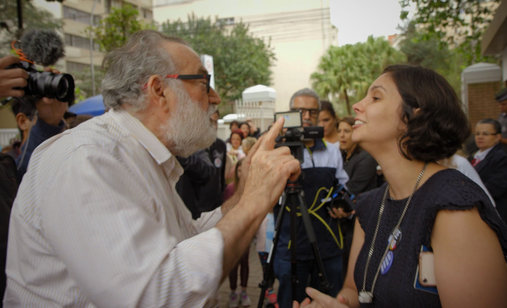 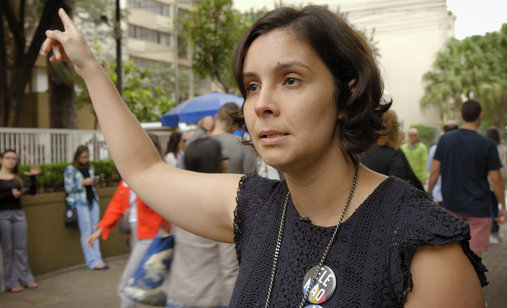 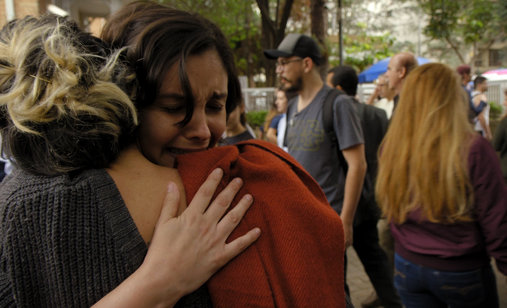 Brazil, 2018. A documentary crew in Brazil attempt to conduct a street interview with journalist Marilia Melhado. It is election time, and everyone’s on tenterhooks about who’s going to win the second round. Will it be right-wing Jair Bolsonaro or the Labor Party’s Fernando Haddad? While a diverse cross-section of the population passes by in the background, Melhado expresses concern about the level of political polarization in the country. Is this still a democratic society in which people with differing opinions can coexist in harmony? Are we still ready to listen to each other? These are the subjects Melhado is trying to discuss, when she is rudely interrupted by Bolsonaro supporters. A heated exchange follows, and they are joined be an ever-growing number of passers-by – a strikingly large number of whom are wearing political badges. The prevailing idea seems to be this: agree with Bolsonaro or get out. This bizarre dispute culminates in physical pushing and pulling, and Melhado herself literally shedding tears for the fate of her country. A tragicomic illustration of the absurdity of contemporary politics, brought into painfully sharp focus in a single unplanned shot.

Clara Lazarim is a filmmaker with a degree in Audiovisual Media from the University of São Paulo, Brazil. She works mainly in the documentary field, as director, editor and assistant director. Her latest work as a director is Battle (2019). She is currently developing Luisas, a project that pours over her family's past, and the essay documentary, Birds.

Rica Saito is a Brazilian director, producer, cinematographer, editor and founder of the company Temporal Filmes. In 2019, he made short documentary Battle. That same year, he edited and finalized the 2nd season of The History Show, winner of the TAL award for best Latin American studio-made TV show. Right now he is developing Letters to the Sea of Time, an essay documentary about fatherhood and heritage, Bye Bye Babylon, a TV series about big city people that decide to live in the countryside, and producing Greens & Yellows, a deep dive into the political crisis in Brazil.

Caio Castor is a Brazilian reporter, documentary filmmaker and editor. He is a contributor to the main organizations covering human rights violations in the country, such as El País Brasil, The Intercept Brasil, Le Monde Diplomatique Brasil, Agência Pública, Ponte Jornalismo and Repórter Brasil, among others. He has captured some of the most dramatic and decisive moments in recent Brazilian history. He is currently dedicated to the production of his first feature film Greens and Yellows, which traces a poignant picture of the rise of Bolsonarism.

Guilherme César is a Brazilian executive producer and director with a degree in Audiovisual Media from the University of São Paulo. He directed and produced many documentaries screened and awarded at festivals in Clermont-Ferrand, Rotterdam, It's All True and Brasilia Film Festival 2007. He was the coordinator of the SPCine Circuito that inaugurated 20 public cinemas in São Paulo.