A little boy’s thoughts on God in a Jihadi neighbourhood in Brussels, an unusual love story among nuns and a controversial movement of Satanist fighters 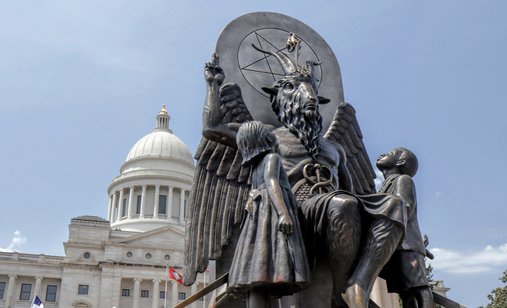 International competition acquaints us with Gods of Molenbeek. Reetta Huhtanen’s debut film follows Aatos and Amin, six-year-olds from the Molenbeek neighbourhood of Brussels, labelled in the media as a Jihadi capital. They foster different interpretation and perception of God. Since Amin has Allah, Aatos wants a different god, one for himself. However, the situation complicates when his friend Flo confidently claims that the people who believe in God are – mad. The complication doesn’t end here: an explosion in a nearby subway interrupts their playfulness. The streets are swarming with soldiers, boyish fantasies stop, even their friendship is at stake. The film Gods of Molenbeek has won many awards and honours, including DocPoint’s Audience & Critic’s Choice Awards, Media Foundation Prize at Tampere Film Festival, Best Newcomer’s Film and Best Moral Approach Award at Makedox.

The film Nun of Your Business competes in regional competition. Directed by Ivana Marinić Kragić, this film took part in ZagrebDox Pro training programme in 2018. The story focuses on two young nuns who fall in love after meeting at a catholic event in Zagreb. They decide to leave their convents, disappointed with the Church and the sexual and emotional abuse within its walls. Outside of the clerical sphere, on a Dalmatian island, they begin their life together. However, in the new environment their love clashes with the local community and traditional views from which two former nuns seek acceptance. Nun of Your Business premieres at ZagrebDox.

The Controversial Dox limelight focuses on the Satanic Temple. Renowned director Penny Lane for the first time sheds light on the background of this mysterious movement with over 100 thousand members around the world. Hail Satan? – screened last year at festivals in Rotterdam, Copenhagen and at Sundance – is a film exploring different aspects of this specific and peculiar movement and its members, following their fights for equality, their activity over issues important for the community, and their ‘devilish’ sense of humour. Is it a cult? Is it a religion to begin with, is it rather art or performance? What kind of Satanist movement fights for the salvation of the human soul? Check out the answers at ZagrebDox.