The Academy Award for best short documentary film went to Learning to Skateboard in a Warzone (If You’re a Girl). Don’t miss it at the 16th ZagrebDox festival! 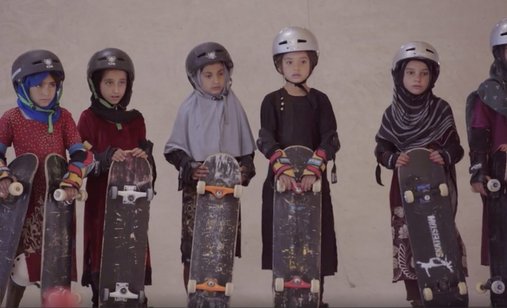 The short documentary Learning to Skateboard in a Warzone (If You’re a Girl) by American director Carol Dysinger is included in this year’s ZagrebDox Teen Dox category. A week ago it also won a BAFTA for best short British film, and it was also honoured by Tribeca Film Festival (best short documentary) and IDA.

The film speaks about young Afghan girls in war-torn Kabul. The Skateistan organisation makes it possible for them to skateboard while learning how to read and write and hence prepare for official education and also gain a sense of freedom. This film is also director Carol Dysinger’s homage to the place where she has been making films over the past 15 years, full of sad discouraging stories for decades. Dysinger didn’t want another such story.

“I don’t want to grow up. That way I’ll be able to skate forever,” says one of the girls in Carol Dysinger’s film. “Boys who skate are seen in the streets with encouragement and sympathy, but a skating girl gets a lot of weird looks and discouraging comments. It’s bad for girls’, they say. That’s why they don’t skate outside, they fly on their boards freely only in school,” said Dysinger in an interview for Jutarnji list.