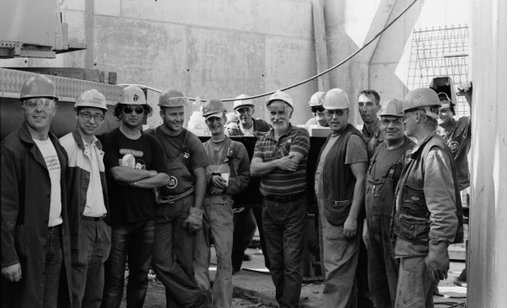 This year’s ZagrebDox audience will have a chance to attend the Author’s Night devoted to award-winning Croatian documentary filmmaker Goran Dević, who is also a member of the International Competition jury. The 7 p.m. screening on Friday, 9th Oct, at the Teatar &TD auditorium features three titles from the oeuvre of this renowned author centring on his hometown of Sisak, as well as the challenging themes of the experience and memories of war still burdening Croatian daily life. These are Imported Crows, Three and Two Furnaces for Udarnik Josip Trojko.

The programme at Teatar &TD starts with a 3 p.m. screening of The Painter and the Thiefdirected by Benjamin Ree, awarded a Special Jury Award for Creative Storytelling at Sundance. It is a tender and heartfelt story, which, skilfully avoiding sentimental traps, portrays the unusual friendship between the two titular protagonists. On the programme at 5 p.m. is Acasă, My Home, by director Radu Ciorniciuc, which introduces us to a family living in harmony with nature in the abandoned nature reserve only a stone’s throw away from the bustling urban centre of Bucharest. The final screening of the day at Teatar &TD starts at 9 p.m. featuring Norwegian film Once Aurora, directing duo Benjamin Langeland and Stian Servoss’ debut documentary about the pop sensation from a rural Norwegian town.

The programme at SC Cinema starts at 4 o’clock with the screening of Sea of Shadows, a fascinating National Geographic documentary in which award-winning Austrian documentary director and cinematographer Richard Ladkani follows a group of scientists, activists, investigative journalists and secret agents on a joint mission to save an endemic species living in California Bay waters.

Celebrated For Sama is on the programme at 6 p.m. So far the winner of over 45 awards, it is a stunning documentary directly speaking about survival in Syria from the point of view of a reporter and activist dreaming about liberal democracy and a devastating story about the director’s experience of raising her daughter Sama during the civil war in Syria.

The 8 p.m. screening presents Sunless Shadows included in the International Competition programme. Iranian veteran filmmaker Mehrdad Oskouei’s feature, which traces the fate of five young Iranian women sentenced for killing their abusive spouses and fathers, won the award for Best Director at IDFA. The programme as SC Cinema ends with a 10 p.m. screening of the music documentary, Amazing Grace, which offers an exclusive insight into the previously unpublished footage of Aretha Franklin’s 1972 concert, recorded at the height of her career. It took almost 40 years for the material to see the light of day, which composer and producer Alan Elliott used as the starting point for the documentary.