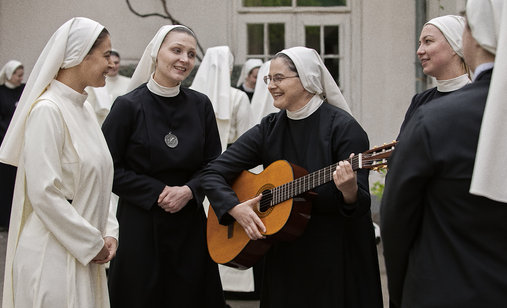 The 16th edition of ZagrebDox, held 15th–22nd March at CineStar Zagreb – Branimir Mingle Mall, brings more than 100 documentary titles from across the globe, while a third of the programme is comprised of Croatian films.

New documentary films by directors Ivana Marinić Kragić, Damir Čučić, Đuro Gavran, Neven Hitrec and Branko Ištvančić will have their premieres in the ZagrebDox Regional Competition. After premiering at festivals abroad, Slađana Lučić’s film will have its first Croatian screening in the Regional Competition, while Robert Tomić Zuber’s film will screen for the first time in Croatia in the Controversial Dox programme. The 16th edition of ZagrebDox will present a total of 32 Croatian films.

Of the 17 titles in the Regional Competition, six are Croatian films, of which five will have their world premiere at the festival. The film Nun of Your Business, directed by Ivana Marinić Kragić is a story of two nuns who fall in love and, disappointed by the backlash from the Church and the abuse within the institution, decide to leave their convents and start a new life together on one of the Dalmatian islands. Director Đuro Gavran’s film One of Us problematizes domestic violence by centring on a high school reunion, on the eve of which the director and his former classmates receive a harrowing letter from one of the other students describing the systematic abuse she endured for years. The film traces a group of young people trying to come to terms with the shocking realization that sheds a completely new light on the years they spent together growing up.

Neven Hitrec offers a critical take on the educational system, as well as his own methods of upbringing, in the highly comical Push–Pull, which is also a witty commentary on the growing up in the age when everything is readily accessible. In this Mexican standoff between parents and children, the learning process seems more like a modern version of the Inquisition – complete with shouting, screaming, manipulative promises and drama. Focusing on a school of fish and studying the patterns of their movement, director Branko Ištvančić in The Anonymous Shoal provides a metaphor for society. Through the author’s lens, the city of Dubrovnik, shot on an August day is transformed into the city’s aquarium. Finally, Damir Čučić creates an homage to unfinished work, in Oxygen Nitrogen, a compilation made out of footage of his 11 unfinished films.

The film Little Star Rising, directed by journalist and TV reporter Slađana Lučić, which will have its Croatian premiere at ZagrebDox, follows the personal path of a proofreader from Sarajevo, Nudžejma Softić, the first hijab-wearing woman in Europe to complete a marathon and a half-Ironman triathlon.

Marija Stojnić’s Speak So I Can See You will have its regional premiere at ZagrebDox. The film is a Serbian-Croatian-Qatari co-production, and it is a story about Radio Belgrade, one of Europe’s oldest radio stations and a true institution of the city, still broadcasting original programming and helping to preserve history, culture and critical thought by addressing the ever-relevant questions about ourselves and the world.

A total of eight Croatian films will screen in different official festival programmes, three of which will be world premieres and one a Croatian premiere. The screening of Robert Tomić Zuber’s Ask Freely in the Controversial Dox programme will be its Croatian premiere. In the film, the author problematizes the perennially hot topic of vaccination and wonders if it is possible to find common ground between those who claim there is no alternative to vaccination and those who are against it.

The Happy Dox programme, traditionally offering lighter subjects or at least lighter approaches to difficult topics, this year also includes two Croatian documentaries. Ivan Grgur, the author of Probably Dead, offers an exceedingly entertaining and absurd take on hypochondria, while Sana Perić in Slow Dance for Past Lovers with a hearty dose of humour examines her own search for love.

The ADU Dox programme willalso include three premieres. At the centre of Karlo Vorih’s Mila, the eponymous heroine reflects on her past, unsuccessful relationships and family problems. In Balm on the Wounds, Anton Mezulić depicts an eccentric married couple who muster the strength and come up with different ways of coping with the burdens of their childhood. In his essay documentary Faceless, David Lušičić thematises the erection of the monument of first Croatian President Franjo Tuđman in Zagreb and paints a wider critical context of the social climate using the footage shot in the days leading up to the inauguration of the monument. The last film in the ADU Dox programme is Ljubica Kotromanović’s Naftalan, about the author’s grandmother who is treated for psoriasis in a specialized clinic called Naftalan.

The Factumentaries programme will feature the Children of Transition, as an in memoriam homage to the recently deceased young award-winning documentary filmmaker Matija Vukšić.

This year, the Author’s Night programme is devoted to acclaimed Croatian director Goran Dević. The festival visitors will have a chance to see three of the author’s titles: Imported Crows (2004), Three (2007) and Two Furnaces for Udarnik Josip Trojko (2012).

One of the special events will also include the screening of the docu-fiction film by Dana Budisavljević, The Diary of Diana B.