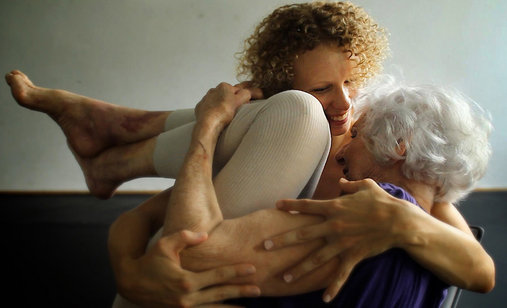 After the critics’ Grand Prix at the Locarno Festival, Sarajevo Film Festival named it the best human rights film and the recent Trieste Film Festival crowned it with the best documentary and Balcani Caucaso Transeuropa Award, the Hungarian film The Euphoria of Being by Réka Szabó is coming to the 16th ZagrebDox in the official regional competition category.

This feature documentary directed by Réka Szabó, a dancer and choreographer, the artistic director of the acclaimed Hungarian contemporary dance theatre, is a touching story about 90-year-old Eva, an Auschwitz survivor.

Éva Fahidi was 20 when she returned to Hungary from Auschwitz-Birkenau. Forty-nine members of her family were killed in the camp, including her mother, father and younger sister. Seventy years later, at the age of 90, Éva takes part in a dance theatre show with the sixty years younger internationally acclaimed dancer Emese Cuhorka.

Éva’s movements tell the tale of exile and deportation, as well as life and survival after Auschwitz. Intertwined with the young dancer’s movement, the past and the present collide in a choreography of life, set both as a dance show and a documentary film, thus reflecting the entire complexity of the story told.