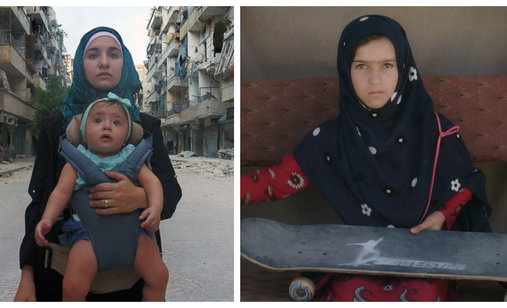 The BAFTA for best documentary film went to For Sama, and Learning to Skateboard in a Warzone (If You’re a Girl) was named the best British film. the most important independent film festival, Sundance, gave its jury award for creative storytelling to the Norwegian film The Painter and the Thief and the jury’s special mention for cinematography went to Romanian film Acasa, My Home.

The documentary film For Sama continues its success streak, garnering almost 50 awards so far, including the latest BAFTA. This is the first ever documentary to be nominated for four BAFTAs. This stunning documentary in a direct manner conveys the story of the director’s experience of raising her daughter Sama during the civil war in Syria. Filming her unspeakably brutal daily life, as a letter to her daughter, filmmaker Waad al-Kateab (with Edward Watts as co-author) speaks about her reasons to stay in Aleppo with her partner, a doctor saving lives day in and day out, despite the permanent risk of their lives and scenes of death surrounding them. Apart from the Oscar nomination and the new BAFTA, the film has also won the audience award at IDFA, European Film Award for best European documentary, Golden Eye Award at Cannes festival, IDA Award, audience and jury award at Sheffield.

Learning to Skateboard in a Warzone (If You’re a Girl)speaks about Afghan girls in war-torn Kabul, who are given a chance by the Skateistan organisation to learn how to read and write and prepare for further official education, but also to gain confidence and the sense of freedom. This film is also a dedication by its director Carol Dysinger to the place where she has been making movies for the past 15 years. Nominated for an Oscar in the best short documentary film category, the film also won the Tribeca festival in the same category and the IDA award.

Following the story from the headlines of Norwegian newspapers about the theft of valuable art, director Benjamin Ree made a film about the protagonists of this case: a painter whose paintings were stolen and the thief who stole them. The Painter and the Thief portrays an unusual and powerful friendship between an up-and-coming artist and a thief whose criminal mask hides more humanity than one might guess.

Acasa, My Home by Radu Ciorniciuc acquaints us with a family living in an abandoned reserve on the Danube estuary, one of the largest urban nature reserves in the world, not far from the bustling daily life of Bucharest, in perfect harmony with nature. When their living space turns into a public national park, the Enache family are forced to replace their idyllic lifestyle with a concrete jungle and step into a reality they know nothing about. Director Radu Ciorniciuc in his documentary offers the viewers a convincing story about an impoverished family fighting for their version of freedom.