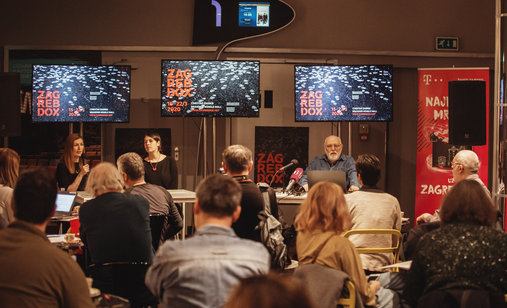 The 16th edition of the International Documentary Film Festival – ZagrebDox presents as many as 112 documentaries and this year takes place 15th–22nd March, at a new venue, CineStar Zagreb – Branimir Mingle Mall. The International Competition programme boasts 17 films competing for the Big Stamp Award, the main festival prize, and an equal number competing for the same award in Regional Competition, while the Little Stamp Award will go to the best film by an author under 35 years of age. Festival Director Nenad Puhovski and Producer Lucija Parać presented this year’s rich ZagrebDox programme at a press conference held yesterday.

“As always, the ZagrebDox audience is in for an impressive number of films this year, including the latest documentary hits, films awarded at prestigious festivals, as well as intimist, “hidden” cinematic jewels. Confronting the viewers with the urgent issues of our time, these works provide a broad overview of contemporary world documentary filmmaking, while also introducing us to inspirational and colourful individuals and lending new insights into important topics, as they whisk us to remote locations or take us to a few undiscovered corners of our own surroundings,” said Nenad Puhovski.

In addition to Oscar-nominated For Sama, by Waad al-Kateab and Edward Watts, and The Cave by Feras Fayyad, the International Competition offers an abundance of films arriving to ZagrebDox straight from their impressive international festival tours. The winner of the International Documentary Film Festival Amsterdam (IDFA), In a Whisper, by directing duo Heidi Hassan and Patricia Pérez Fernández, brings a story about friendship that surpasses geographical barriers, while IDFA mid-length competition laureate, Anticlockwise, directed by Iranian Jalal Vafaei, is a moving portrait of the author’ family and their struggle against the oppressive Iranian regime. Iranian filmmaking veteran Mehrdad Oskouei, winner of the IDFA directing award for Sunless Shadow, arrives with a devastating portrait of five young Iranian girls imprisoned for killing their abusive spouses or fathers. The ZagrebDox International Competition also includes last year’s IDFA First Appearance special mention winner Ilya Povolotskiy’s debut Froth, an astonishing cinematic study of a small eclectic community of “subpolar cowboys” living in the semi-deserted town on the shores of the inhospitable Barents Sea. The winner of the main festival prize at CPH:DOX, Ridge, directed by John Skoog, whom the jury described as the Swedish Tarkovsky, skilfully employs cinematic language painting a minutely detailed picture of an idle summer in Scandinavia. In the manner of a gripping thriller, Polish Wind. A Documentary Thriller, directed by Michał Bielawski, evolves into an extraordinary cinematic symphony about the unpredictable and destructive power of the wind that blows several times a year in the Polish region of Podhale.

The winner of DOK Leipzig, Exemplary Behaviour, directed by Audrius Mickevicius and Nerijus Milerius, examines the notions of crime, justice and forgiveness by telling the story of the inmates of the Lithuanian prison Lukiškės. On the other hand, Swedish director Mikel Cee Karlsson attempts to shed some light on the fate of his best friend, gradually uncovering a previously hidden side of his life in Fraemling (A Stranger). Using documentary footage, interviews and reconstruction techniques to piece together certain scenes, the author weaves a story about the very fine line between sacrifice and guilt. Controversial Israeli lawyer Lea Tsemel, known for her fearless and impassioned advocacy for the rights of Palestinian political prisoners is the central protagonist of the impressive Advocate, which has earned directing duo Rachel Leah Jones and Phillippe Bellaiche numerous awards, including being shortlisted for an Academy Award. In his latest documentary, Midnight Family, winner of the Special Jury Award for Cinematography at Sundance, young American director Luke Lorentzen accompanies a Mexican family on frenzied and turbulent night rides as they race around the streets of Mexico City. Shot in cinema vérité style, the film follows the work of a privately owned ambulance service, in the process revealing fatal gaps in the state-sponsored healthcare system. Sundance Special Jury Award laureate The Painter and the Thief, directed by Benjamin Ree,is a tender and heartfelt story, which, skilfully avoiding sentimental traps, assembles a cinematic equivalent of a cubist painting of the unusual friendship between the two titular protagonists. Having scooped the Best Emerging Director Award at Locarno Film Festival for 143 Sahara Street, Hassen Ferhani arrives at ZagrebDox with an intimate and evocative documentary about a lone café in the middle of the Sahara Desert. The infamous Brussels neighbourhood Molenbeek, known for suicide bombers and police patrols, is portrayed through the eyes of two little boys from vastly different cultural backgrounds in Finnish director Reetta Huhtanen’s Gods of Molenbeek. The lyrically framed documentary succeeds in finding a fresh and imaginative way of broaching one of the most pressing issues of the present day – the (in)ability of coexistence in difference. Family secrets, repressed memories and unspoken trauma are at the centre of the family drama, It Takes a Family, in which director Susanne Kovács offers a complex, intimate story of her own family, the Holocaust and horrors from the past that, passed down from generation to generation, still haunt us in the present. Russian director Ksenia Okhapkina’s Karlovy Vary IFF Grand Prix winner, Immortal, perspicaciously examines the way the mechanisms of political power affect our everyday life, even in the most benign of situations.

Competing for the Big Stamp Award, the Regional Competition also includes six Croatian titles, five of which will have their world premieres at ZagrebDox. Next to Little Star Rising by Slađana Lučić, screened last summer at Sarajevo Film Festival, the programme also includes latest films by Neven Hitrec (Push-Pull), Branko Ištvančić (The Anonymous Shoal), Damir Čučić (Oxygen Nitrogen) and Đuro Gavran (One of Us), as well as Ivana Marinić Kragić’s documentary debut Nun of Your Business, a love story found where you would least expect it. The soundscape of Radio Belgrade, one of Europe’s oldest radio stations, is the topic of the synesthetic feature, Speak So I Can See You, directed by Marija Stojnić, a Serbian-Croatian-Qatari co-production. B&H director Jasmila Žbanić returns to ZagrebDox with Airborne, an imaginative and intimate depiction of the secondary effects of war, in which the intense testimony of the director’s husband Damir about his fear of flying often veers into comical episodes. The topics of memory, war trauma and the interconnections between the past and the present are originally and movingly rendered in The Euphoria of Being, directed by Hungarian Réka Szabó. The film comes bearing a series of accolades, including the Locarno Film Festival Grand Prix, as well as the Sarajevo Film Festival Human Rights Award.

Economic migration, in this case, in reverse – from Europe’s epicentre to South-eastern Europe, is the topic of Bulgarian Dream, directed by Srđan Šarenc. The film centres on a German pensioner who, unable to lead a comfortable life in her native country, relocates to Bulgaria, and tackles social issues, as well as the topic of ageing and the society’s marginalization of the elderly. The daily life of two elderly women living in the remote mountainous region of eastern Bosnia, steeped in local cultural heritage and rituals in complete harmony with nature, is poetically rendered in Then Comes the Evening, directed by Maja Novaković. In Siddharta, Italian directing duo Damiano Giacomelli and Lorenzo Raponi offer a story about a father and son who choose the life in a secluded Italian village over the comforts of modern civilisation. Meanwhile, a family living in harmony with nature in the abandoned nature reserve only a stone’s throw away from the bustling urban centre of Bucharest is depicted in Acasă, My Home by director Radu Ciorniciuc. A remote town at the foot of the Austrian Alps is the locale of Sebastian Brameshuber’s Movements of a Nearby Mountain. The Cinéma du Réel laureate about a Nigerian immigrant making his living repairing cars amidst the grind of the mining industry is an examination of an individual’s place in the global economy. Romanian-German director Alexander Nanau’s Colectiv offers an uncompromising testament to the importance and impact of investigative journalism, tracing a case involving the disclosure of corruption in the Romanian healthcare system. Directors Vanja Dimitrova and Natasha Dimitrievska in Locked Storms take the viewers into the daily life of the inmates of a female correctional institution and the patients in a psychiatric hospital, normally tightly guarded from the eyes of the public. Siniša Gačić offers a different take on the Italian mafia, stripped of the usual fascination with the phenomenon, in Daughter of Camorra, focusing on a woman who used to be a member of the infamous Camorra organization but, after being released from prison, now has to face the challenges of daily life.

In addition to the competition programmes, the ZagrebDox audience can expect plenty of documentaries in other official programmes: Biography Dox, Musical Globe, Happy Dox, Controversial Dox, Masters of Dox, State of Affairs, Teen Dox and ADU Dox, while the programme Factumentaries will screen Children of Transition by recently deceased young director Matija Vukšić. The retrospectives section brings three programmes: the Lucy Walker Retrospective, featuring eight films by the British director whose accolades include an Emmy Award and two Academy Award nominations, while the programme Female Directors in Croatian Documentary Production, curated by Diana Nenadić, offers a cross section of Croatian documentary cinema made by women in the past five decades and features films by directors such as Milica Borojević, Snježana Tribuson, Katarina Zrinka Matijević, Tatjana Božić and Dana Budisavljević. Meanwhile, the Author’s Night programme is this year devoted to acclaimed Croatian director Goran Dević. Novelties this year include a new programme titled Eco Dox, devoted to the effects of the global ecological crisis, and the Filmmakers on Filmmakers programme featuring portraits of the titans of world cinema by renowned directors.

“Films in the 17 ZagrebDox programmes will be screened at the five CineStar Zagreb screening halls, followed by Q&As with festival guests presenting their films. In addition, ZagrebDox Pro includes several events open to the public, including masterclasses by Dana Budisavljević and Lucy Walker, while ZagrebDoXXL special events feature panel discussions on topics problematized by the films in the programme, such as the migration crisis, vaccination, gentrification and climate change. Once again, the audience will have a chance to attend gratuitous screenings of all the films in the International and Regional Competition, in earlier slots during the day, while after the festival closing ceremony, on Sunday 22nd Mar, all the awarded films will also be screened in the The Best of Fest programme,“ said Lucija Parać.

Ticket sales begin in early March, while tickets will be available at the CineStar Zagreb – Branimir Mingle Mall box office, at ticket machines in the cinema foyer, as well as online, at blitz-cinestar.hr and via the iCineStar mobile app.

ZagrebDox is supported by the City of Zagreb and the Croatian Audiovisual Centre, while ZagrebDox Pro receives the support of the MEDIA sub-programme of Creative Europe. The general sponsor of ZagrebDox is Croatian Telecom.