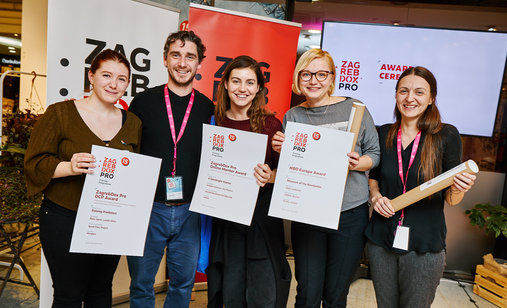 Following a four-day workshop and the Pitching Forum presenting the projects to the members of the international panel, the award ceremony of this year’s ZagrebDox Pro training programme took place. The best projects are Museum of the Revolution, 4 Goodnight Stories and Raising Predators.

The HBO Europe Award, a diploma and 2000 euro for further project development went to the Serbian-Croatian project Museum of the Revolution by Srđan Keča about an unusual friendship between an old woman and a little girl living in the ruins of an abandoned utopian project, presented at ZagrebDox by producer Vanja Jambrović.

The ZagrebDox Pro Online Mentor Award, a diploma and a one-year online mentoring with Želimir Žilnik went to director Anđelka Vujinović and the co-author and DoP Mija Mujović for the project 4 Goodnight Stories. Closely documenting the life in the biggest nursing home in Serbia, this project explores the meaning of old age and its taboos and captures mood of the last moments.

The best project of this year’s edition of ZagrebDox Pro, according to the joint decision of all the panellists is the Hungarian project Raising Predators by director Réka Ugron and producer László Józs, about Sandra the falconer who has a hard time establishing an emotional connection with her children due to her own dramatic childhood memories. They won the ZagrebDox Pro DCP Award, including a diploma and the professional DCP format material.

The 15th edition of the programme included 12 documentary projects at different stages of development and production from 12 countries and the workshop mentors were the managing and artistic director of DOK Leipzig Leena Pasanen and director and producer Stefano Tealdi. ZagrebDox Pro is funded by Creative Europe – MEDIA Sub-programme, Government of the Republic of Croatia – Office for Cooperation with NGOs, Croatian Audiovisual Centre, City of Zagreb and Croatian Film Directors Guild.