"One of Us" by Đuro Gavran wins The HBO Europe Award, "The Infidel" by Nejra Latić Hulusić and Sabrina Begović-Ćorić wins ZagrebDox Pro Online Mentor Award and the ZagrebDox Pro DCP Award is handed to Jaśmina Wójcik and Joanna Tatko for "Symphony of the Ursus Factory". 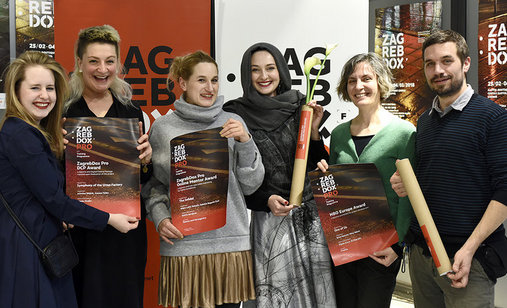 After a four-day workshop and the Pitching Forum, this year’s ZagrebDox Pro award ceremony took place. For the 14th edition of ZagrebDox Pro workshop facilitators and mentors Leena Pasanen and Stefano Tealdi chose 12 projectsfrom 11 countries at different stages of development and production.

The intense workshops were followed by the Pitching Forum, the central event where the projects were presented to the members of the international panel, all film industry professionals, and tonight the best projects were announced.

The HBO Europe Award, a diploma and 2000 EUR for further project development went to the Croatian project One of Us, presented by director and producer Đuro Gavran and editor Nina Velnić, produced by Pipser production company from Zagreb.

A simple letter from a classmate before the reunion of a class 15 years after the graduation encouraged the director to organize a shooting of a very special film. It was a great pitch, visually promising and stylistically clean trailer.

The ZagrebDox Pro Online Mentor Award, a diploma and one-year online mentorship with Hanka Kastelicova went to director Nejra Latić Hulusić and producer Sabrina Begović-Ćorić for their project The Infidel, about a young man from Bosnia raised in a radical Islamist community, who is trying to build his life anew after accusations that he took part in a terrorist attack. The project is produced by HAVA Sarajevo.

How to grow in a country, where different radical religious ideas are offered? Are we responsible for the actions of our family? How to deal with the loss of your father and older brother? These and many other questions occurred after the pitch of the project "The Infidel" by Nejra Latić Hulusić. The panel of ZagrebDox Pro agreed to support this project with one-year mentoring of the development of the project.

ZagrebDox Pro DCP Award, a diploma and a DCP format upon the completion of the project, given at the discretion of all the panellists, went to the team of the Polish project Symphony of the Ursus Factory, director Jaśmina Wójcik and production manager Joanna Tatko from Wajda Studio. In Symphony of the Ursus Factory former workers with the help of factory sounds and their body memory recreate a day at the factory plant which no longer exists.

The workshop mentors Leena Pasanen and Stefano Tealdi gave another special award, to the team which showed most creativity during the workshop and helped other participants with their projects, especially with the titles. The award went to Jassim Alsaady and Dirk Simon.