Biography of a Photo 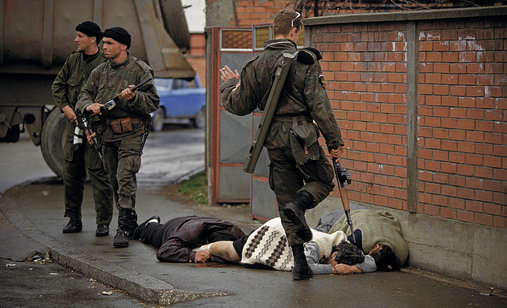 +
Two iconic photographs of conflict shape the course of history and inspire a quest for justice.

Ron Haviv is an Emmy-nominated filmmaker, an award-winning photographer and co-founder of the agency VII, dedicated to documenting conflict and raising awareness about human rights issues around the globe. In the last three decades, Haviv has covered more than 25 conflicts and worked in over one hundred countries. His work has had singular impact. President George H.W. Bush cited Haviv’s chilling photographs documenting paramilitary violence in Panama as one of the reasons for the 1989 American intervention. Haviv’s work in the Balkans was used as evidence to indict and convict war criminals at the international tribunal in The Hague. He has published four critically acclaimed collections of photography, and his work has been featured in numerous museums and galleries, including the Louvre, the United Nations, and the Council on Foreign Relations. He has directed short films for ESPN, People Magazine, Doctors without Borders (MSF). Haviv directed the short film Amazon Gold, documenting illegal gold mining in Peru, for PBS. His first photography book, Blood and Honey: A Balkan War Journal, was called “one of the best non-fiction books of the year,” by The Los Angeles Times and “a chilling but vastly important record of a people’s suffering,” by Newsweek. His other monographs are Afghanistan: The Road to Kabul, Haiti: 12 January 2010 and The Lost Rolls.

Srdjan Šarenac is an award-winning filmmaker and producer. He co-produced the short fiction I Do Not Dream (2008) by Ivana Lalovic, which premiered at the 65th Venice Film Festival. He also co-produced and directed the feature-length documentary Village Without Women (2010) which had its premiere in the official selection at IDFA, was screened at 80 other film festivals, winning 14 awards, and was released in 50 countries. The Road Movie (2016), which he co-produced, premiered in competition at IDFA and was screened at 80 film festivals including Hot Docs, True / False, winning three awards. It received a nomination for the Academy Awards 2019 in the category Best Feature Documentary and was distributed by Oscilloscope Laboratories in 80 cinemas across USA and Canada. In 2017, Šarenac directed and produced Two Schools screened at 30 film festivals, including ZagrebDox and Sarajevo Film Festival winning three awards.