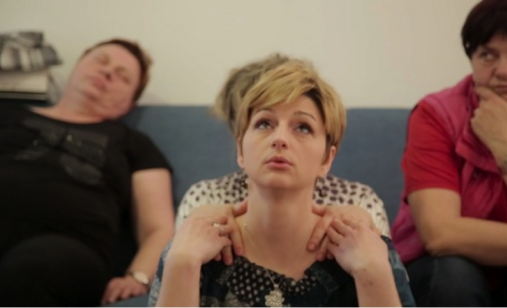 +
A documentary essay with animated elements set in the post-war period. A group of raped women / four unconventional therapists / a strictly confidential and intimate inner journey to recovery. Can they discover the juice of life again?

Vedrana Pribačić (1977) is a Croatian journalist, director and scriptwriter. She holds a master’s degree in Political Sciences, University of Political Sciences in Zagreb. A member of the Croatian Filmmakers Association. She worked as a TV reporter and editor-in-chief. Since 2015 she has made three TV documentaries and, in 2016, The Factory is Ours! won two film awards. Bigger than Trauma is her first feature documentary.

Mirta Puhlovski (1978) graduated in Film and Theatre Production at Academy of Dramatic Art in Zagreb. She participated in Berlinale Talent Campus 2006, and many other production workshops. She has been working as an independent producer, organiser and first assistant director on short, feature and documentary films for 18 years. She is the producer and general manager of NGO Metar 60 founded in 2006; In 2011 she founded the production company Slavica Film. As the CEO of Slavica film and president of Metar 60 she produced around 30 short films and a few short and TV documentaries. Her work in film has been honoured with numerous awards, including Best Short Fiction at 2016 LA Film Festival, New Filmmakers L. A. 2017, Cinematic Achievement Award–Thessaloniki Film Festival and many more.

Marta Broz was born in Zagreb in 1993. She is a final year student at the Academy of Dramatic Art in Zagreb and she took part in the European Editing Masterclass at Lodz Film School in Poland. So far she has edited several short documentaries including White Trash and Iva. Bigger than Trauma is her first feature documentary.