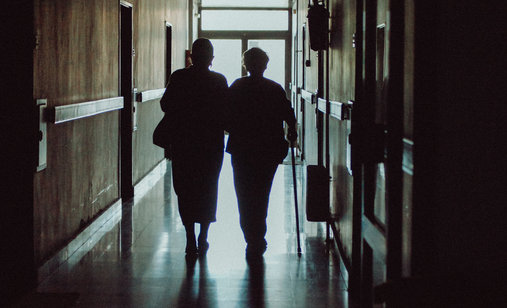 +
Closely documenting life in the biggest Gerontological center of Serbia, the film explores the meaning of old age, dealing with its taboos, capturing the mood of the last moments.

Anđelka Vujinović graduated from the Film and TV Directing Department at Dunav Film Academy in Belgrade. She acquired additional education and experience as a theatre actor and director. First she worked as an organiser and producer at the National Broadcasting Company of Serbia, then she co-founded the independent theatre group Ensemble Mirage where she worked as a dramaturge, director and actress. In 2011 she founded a School of Theatre and Film TeatarPoesia (Movement Imaginarium) where she holds lectures and workshops.

Mia Mujović is a photographer and cinematographer. She holds a Master’s degree in Applied Arts from the University Alice Salomon, Berlin. After finishing a photography course at the Galileo Galilei Institute in Florence, Italy, she started exhibiting and publishing her photographs and won award at the Young Love photo competition, Berlin ArtParasites. In 2018 Mia made a short documentary Awakening, part of the omnibus Guardians of Barzahk, and co-founded a movement for the research and development of the human being – Imaginarijum.