Croatian Premiere of Ranko Pauković’s Film about Miner Sakiba, screening of The King by Eugene Jarecki and On Her Shoulders, a documentary film following Yazidi human rights activist Nadia Murad. 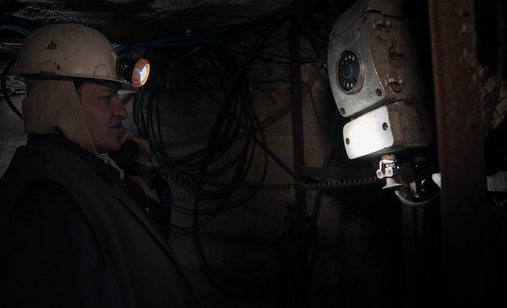 Dox Wednesday will be marked by the Croatian premiere of Ranko Pauković’s new film The End of Darkness, a story about Sakiba, one of the last miners in the Breza mine, exploring what it means to be a woman in present-day Bosnia and Herzegovina. Her life underground is a remnant of another era, when crisis and lack of labour forced women below the ground. The film is scheduled for 8pm (theatre 3), followed by a Q&A with the director and the protagonist.

Another thing to look forward to is the world premiere of How Much Do You Love Yourself?, followed by a Q&A with Slovenian director Nina Blažin at 6pm (theatre 3). Filming Viktorija, a homeless seeking for a place to live with her husband when he gets out of prison, a new life without drugs, the director speaks about universal human needs and possibilities for life change. Q&As with several foreign female directors will follow after the screenings of their films.

At 1pm (theatre 1), Polish director Jaśmina Wójcik is presenting her film Symphony of the Ursus Factory in which in a choreographed re-enactment of a work day in the former Polish Ursus factory portrays the process of economic transition and the penetration of capitalism into post-socialist societies.

At 5pm we will speaking with Sofia Haugan about the film My Heart Belongs to Daddy, a personal tale about her relationship with her unreliable father, a petty criminal and drug addict. Italian director Valentina Primavera has also filmed personal tale. In the film Una Primavera, scheduled for 6pm (theatre 4), the director follows her 60-year-old mother who decides to leave her husband after 40 years over yet another case of domestic violence.

This year’s new programme Famous on Famous at 7pm (theatre 1) presents the film The King by Eugene Jarecki, the double winner of jury grand prix at Sundance. The film is a story about ups and downs of Elvis Presley and a sort of musical journey across the States. The rock’n’roll follow up gathering continues at 9.30pm at Kaptol Centre’s Wow bar, with Johnny and His Rockin’ Tunes at the Dox Rock Party as the uncrowned kings of a music evening dedicated to Elvis Presley.

Next to these titles, the international competition line-up on Wednesday includes the film by RaMell Ross Hale County This Morning, This Evening at 3pm (theatre 1), in many people’s opinion unjustly neglected at the Oscars, which raises many questions about race and identity. The film The Raft by Marcus Lindeen, about the famous social experiment of a Mexican anthropologist from 1973 – a sail across the Atlantic on a raft, is scheduled for 4pm (theatre 3).

On Her Shoulders, a film directed by Alexandria Bombach, about Nadia Murad who survived the genocide of the Yazidi minority in North Iraq and escaped ISIL’s sexual slavery, is scheduled for 8pm (theatre 4).

At ZagrebDox Pro training programme, from 6pm to 8pm at the Festival Centre (Kaptol Centre, level 2), Sony in association with AVC is presenting cutting-edge recording equipment.

The film programme ends with four evening screenings. At 9pm don’t miss the absolute docu-hit of the young director Bing Liu Minding the Gap, which has so far won over 50 awards at different film festivals. At the same time theatre 2 is screening Aquarela by the master of observational documentary Victor Kossakovsky, portraying the immeasurable, raw power and whimsical nature of water, the most precious resource on Earth.

At 10pm (theatre 3) we will be watching the provocative The Artist and the Pervert – a feature debut by Beatrice Behn and René Gebhardt about the open and controversial relationship of one of the most important living symphony music composers and his wife, an African American perversion expert.

In the State of Affairs section, check out Half the Picture by Amy Adrion, with a series of interviews with successful female Hollywood directors in the year marked by #timesup and #metoo movements, speaking about the humiliatingly small number of female directors in male Hollywood.