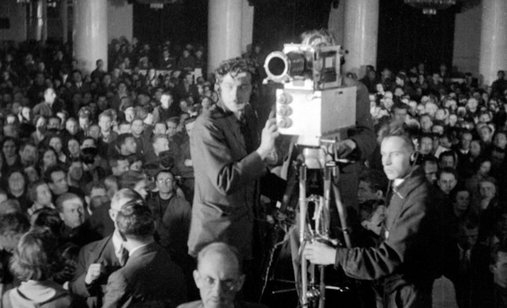 The central festival event on Friday is a masterclass of the renowned Ukrainian director Sergei Loznitsa, scheduled for 5.15pm (theatre 5). On the example of his four documentaries Blockade, Revue, Event and Trial, Loznitsa will acquaint the audience with his work methods, editing films based on archive materials and challenges in sound design.

Author’s night will be dedicated to one of the most successful Croatian middle-generation documentary filmmakers, equally esteemed by both audience and critics, the president of the 15th ZagrebDox international jury, Nebojša Slijepčević, scheduled for 7pm (theatre 2). We will be watching his multi award-winning documentary Srbenka and the short controversial Real Man’s Film (2012). An extended ZagrebDoXXL Q&A session with Nebojša will follow.

A Q&A session with the renowned Latvian director, one of the founders of the legendary school of poetic documentary film in Riga, Ivars Seleckis, will take place after the screening of his film To Be Continued at 6pm (theatre 3). The film portrays five first graders from different families over the course of the school year and examines how parents’ decisions impact the children’s views.

At 5pm (theatre 1) we will be watching the film John McEnroe – In the Realm of Perfection, from the Biography Dox section. With this film the French director Julien Faraut in an interesting manners visually analyses the 1984 French Open finals, a match between John McEnroe and Ivan Lendl. The popular Musical Globe section takes us back to the seventies with a screening of Studio 54 by Matt Tyrnauer at 8pm (theatre 3), depicting this popular NYC nightclub, a hub of scandals and hedonism. The screening will be followed by a special event, Dox Disco Party, at Wow bar, with DJ MacGregor and dance hits of the seventies.

Friday also brings three Teen Dox titles. At 1pm (theatre 5), I Am Another You by Chinese director Nanfu Wang explores the notion of individual freedom and its limits. At 2pm (theatre 4) the extraordinary film The Two of Us by Danish director Emil Næsby Hanses follows at theatre 4, taking us to the vortex of discussions, arguments and happy moments of two people in love who become friends, and at 5pm (theatre 2) we will be watching What Walaa Wants by Canadian director Christy Garland, about the impressive rebellious Palestinian teenager who wants to join the army.The festival day wraps up with the screening of Generation Wealth by famous director Lauren Greenfield at 9pm (theatre 1), focusing on the issue of ‘cheap money’, following the ‘high class’ around the world, and at 10pm (theatre 3) we are screening the film by famous Margarethe von Trotta Searching for Ingmar Bergman, exploring Bergman’s legacy with the help of his closest associates.