From competitive challenges, first loves and questioning the notion of freedom, to brotherly (dis)harmony and the unusual coming of age of a rebellious Palestinian teenager. 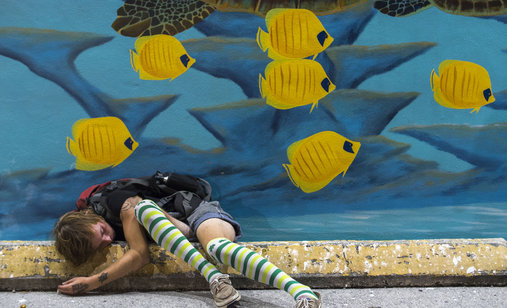 The backbone of this year's festival programme, among other sections, is the Teen Dox section featuring five films of different subject matters with a focus on teenagers.

Nanfu Wang, an independent New York-based director from China, whose award-winning feature debut Hooligan Sparrow competed in ZagrebDox’s international competition two years ago, this time presents her film I Am Another You. Travelling across the States, the director follows the young, charismatic Dylan, who traded the comfort of family home and love for a life in the street. Fascinated with his choice which defies social norms and motivated by her own libertarian ideas, Nanfu is exploring the notion of individual freedom and its boundaries.

In the film The Two of Us, the Danish director Emil Næsby speaks about first teenage love and a first such breakup. Although Skjold and Isabel are no longer in love, they will remain each other’s first love forever. While they are trying to figure out what they are as a couple and what as individuals, they develop a strong friendship which will always hold dear a nostalgic memory of a summer in Copenhagen when their love was blooming.

The directing duo Cristina Costantini and Darren Foster in the film Science Fair examine the challenges facing nine high schoolers from different sides of the world at the International Science Fair in Los Angeles. This multi award-winning documentary introduces us to the world of serious rivalry and the fun world of teenage hormones which appears to be the same all over the world.

An impressive female character of a rebellious Palestinian teenager who wants to join the army is depicted by the Canadian director Christy Garland in the film What Walaa Wants. Growing up in the biggest refugee camp on the West Coast – next to the Gaza Strip and under Israel’s military surveillance – Walaa dreams of becoming a police officer, wearing a uniform, avoiding marriage and earning for a living. Despite the warnings that ‘army is no place for women’ and that she is a disgrace to the family, she enters – and passes.

The young director Benjamin Mullinkosson brings us a story of Peter and Matthew, two ginger brothers and their coming of age in the American daily life. The sibling relationship which only seemingly looks harmonious unmasks a story about facing individual fears. Matthew has an irrational and extreme fear of dogs and Peter is obsessed with the Survivor reality show. Don’t Be a Dick About It documents two funny brothers in a constant fight as they are trying to overcome their fears and, although they accept mutual differences and flaws, they equally – if not more – mock them.