This year we meet the incredibly brave Iraqi reporter Noor Al Helli, travel to Siberian taiga, learn all about the little victories of the victims of Franco’s regime in Spain, and tackle the generally accepted term of economic growth. 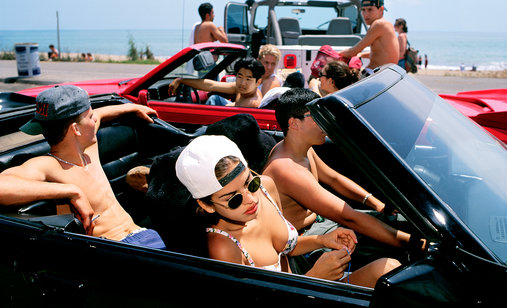 The official section State of Affairs gives audience an insight into famous and not so famous events, as well as interesting and new points of view on many social phenomena, and its documentary stories often take us to the furthermost corners of our planet. This year we will be travelling to the Siberian taiga and meet the Braguine and the Killine, two feuded families. We will also meet the incredibly brave Iraqi reporter Noor Al Helli and learn all about the little victories of the victims of Franco’s regime in Spain. In the German documentary System Error we will tackle the generally accepted term of economic growth and finally we will meet a family of four from Mumbai and their rooster.

In her new amazing documentary Generation Wealth Lauren Greenfield (The Queen of Versailles, Kids & Money, Beauty Culture etc.) is trying to get to the bottom of the modern-day obsession with wealth. The many interviewees, rich men, starlets and celebrities, also include the so-called ‘Antichrist of the financial world’ Florian Homm. In 2018 the film opened the Sundance Festival and was also screened at Berlinale, SXSW, CPH:DOX and other festivals.

A significant story about a brave Iraqi woman is the documentary Women with Gunpowder Earring by the Iranian director Reza Farahmand. The protagonist, Noor Al Helli, is a reporter who, motivated by the cruel daily life of war and terrorism in the Middle East, leaves for the liberated but still dangerous area in North Iraq. In a camp controlled by the Iraqi government, she meets those we seldom remember, the terrorists’ families, women and children surrounded by the smell of gunpowder and sounds of explosions. Winner of the best director award at the documentary film festival Cinema Vérité in Iran, this film testifies to the outstanding power of a woman to change the world.

Two documentaries take a critical stand against the current conditions in the global economic and environmental system. The German System Error by Florian Opitz deals with the issue of contemporary capitalism, based on the concept of infinite growth. Why do we insist so much on constant growth if we know it could be the death of us? The other film is the visually impressive Living in the Future’s Past by the American director Susan Kucera, focusing on how people treat the planet. The film starts from the fact that the Earth has existed a lot longer than us and will continue to exist even after we are gone. An entire series of renowned scientists and philosophers speak in the film, narrated and produced by the famous actor Jeff Bridges.

The year marked by the #timesup and #metoo movements, filmmaker Amy Adrion is filming a series of interviews with successful Hollywood female directors. Her documentary Half the Picture, an award-winning Sundance entry, speaks about the shockingly small number of female directors in Hollywood. Ava DuVernay, Jill Soloway, Lena Dunham, Catherine Hardwicke, Miranda July and many others speak about their beginnings, successes and difficulties.

At ZagrebDox don’t miss an entirely different documentary, directed by the versatile French visual artist and director Clément Cogitore (Wakhan Front, award-winner at the Cannes Critics’ Week; Bielutin, screened at ZagrebDox 2013). The film Braguino, award-winner at Dokufest, Indielisboa and FID Marseille, as well as film festivals in Moscow and San Sebastian, takes the viewers to the heart of the Siberian taiga, 700 kilometres off the nearest settlement. In a dreamy wilderness reachable only by helicopter we meet two feuded families, the Braguines and the Kilines. The descendants of ‘old believers’, the persecuted dissidents of the Russian Orthodox Church, they live in harmony with nature, which could soon be jeopardised by the planned deforestation.

The American-Spanish film The Silence of Others by Almudena Carracedo and Robert Bahar, produced by Pedro Almodóvar, is a film about persistent individuals and their small victories. The controversial amnesty law in Span has been in force for 40 years. Wishing to terminate their own and collective silence, the film protagonists, victims of Franco’s regime, speak about their memories. The film won the Audience Award and Peace Film Prize at Berlinale and was also honoured in Sheffield and Jihlava.

The short Indian documentary Tungrus by Rishi Chandna takes us to Mumbai. We meet a family of four who share their small space with a special rooster. Since with time the feathery pet has started to take up too much space, the question arises whether to eat it or not.