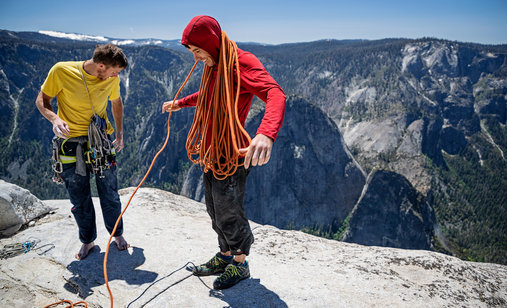 Straight from the list of Academy Awards nominees for best feature documentary comes the latest National Geographic film Free Solo (dir. Elizabeth Chai Vasarhelyi and Jimmy Chin) about climber Alex Honnold and his mission to be the first to climb the 900 meters high El Capitan rock in the Yosemite National Park without a rope and safety gear, which is one of the biggest achievements in the history of climbing. Against the backdrop of magnificent nature and steep rocks, this fearless climber reveals why he is in free climbing and how he achieves full concentration at heights where even the smallest mistake can have fatal consequences. Before the Oscar and BAFTA nominations, Free Solo won the Audience Award at the 43rd Toronto International Film Festival.

Director Julien Faraut used the collection of 16mm films from the French National Institute of Sport for his film John McEnroe: In the Realm of Perfection, a study of movement and body, tennis and analogue cinema. The film is an interesting procedure of the visual analysis of the 1984 French Open finals between John McEnroe and Ivan Lendl. McEnroe was at that time the best player in the world and in this match he was facing not only the rival, but also his famous anger bursts, which he was trying to conceal. Free Solo and John McEnroe: In the Realm of Perfection will be screened in Biography Dox section.

Another climbing story is featured in the 15th ZagrebDox regional competition by director Mladen Kovačević. His film 4 Years in 10 Minutes is an intimate portrayal of an unusual journey and adventure of the first Serbian climber to climb Mount Everest. Interestingly, the film was composed of random amateur video footage and journal entries of the protagonists, found 17 years later.

Boxing is the focus of the Romanian documentary by Alexander Mavrodinean Caisă, also to be screened in regional competition. It is a story about persistence, resilience and survival in a cruel environment inside and outside the training room. In a derelict gym in Bucharest, a boxing veteran coaches new generations of boxers, mostly children from poor families, including the talented 13-year-old called Caisă (apricot).