Vivienne Westwood’s activism, Yves Saint Laurent’s moderation and Guo Pei’s eccentricity in docu-stories from the pinnacles of the fashion world. 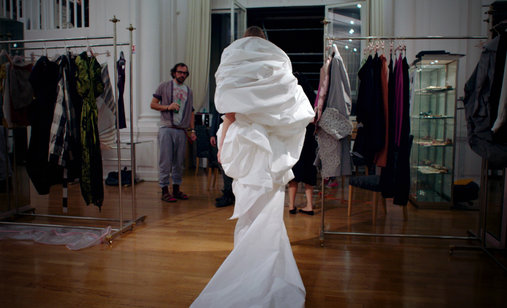 One of the new features of the 15th ZagrebDox festival, taking place from 24 February to 3 March at Kaptol Boutique Cinema in Zagreb, is the special programme Fashion Dox with three documentary films about great names of the fashion scene. The programme portrays two unique designers: the British rebel and activist Vivienne Westwood and the fashion pioneer of the new China Guo Pei, alongside the iconic French fashion designer Yves Saint Laurent and his long-time shadow partner – Pierre Bergé.

British director and former fashion model Lorna Tucker in the film Westwood: Punk, Icon, Activist tells an incredible tale of one of the true fashion icons of our time – Vivienne Westwood. The star of British design, a former punker and today an ardent environmental activist advocating the principles of sustainable production, speaks in the film about her personal success, art, activism, fight for preservation of her brand’s integrity and her principles. Using archive footage and new materials, interviews with her family and close friends, Tucker skilfully and impressively portrays the provocative, environmentally aware and avant-garde artist whose work an oeuvre stretch far beyond the realm of fashion.

The film Yellow Is Forbidden by Pïetra Brettkelly from New Zealand is a double film portrait. In it we meet the fashion designer Guo Pei, the symbol of the ‘new China’, a woman who rose to stardom with the spectacular and extravagant yellow dress made for singer Rihanna for the Met Gala, and at the same time we witness the paradoxical fashion world and the way Pei copes with all this chaos. Through a story of personal success the film points to cultural and market differences between the West and the East, their stereotypes and prejudices, as well as the presence of traditional values in the modern-day context.

Celebration documents one of the greatest Parisian designers and the fashion pioneer Yves Saint Laurent preparing the 2002 collection for his last ever fashion show. French director Olivier Meyrou also turns his camera to the inevitable shadow figure of all the fashion, business and private aspects of the YSL brand – Pierre Bergé.